Tyler C. is a young man—far too young to be facing lifelong complications from the use of the Kugel Mesh Patch. Although he is only in his early 20s, Tyler has already had numerous surgeries to fix problems likely caused by his hernia patch. Unfortunately, Tyler faces still more surgeries, and he has no guarantee that those surgeries will fix his problems.

Tyler had his first hernia repair surgery and it seemed to have gone well—Tyler did not notice any problems. It wasn't until later that Tyler discovered something was wrong—and things were very wrong. 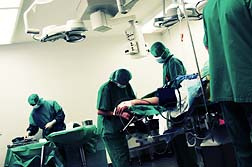 Tyler had a "re-repair surgery" on his right side, where the initial surgery was. Shortly after, he had a similar surgery on his left side.

"I've had a lot of complications," Tyler says. "I had an umbilical repair after those surgeries. I've been in and out of the doctor's office and to the emergency room. I'm in constant pain. I have blood and pus oozing from my belly button and my skin makes it look like I've gained weight, but I haven't.

"I've been on numerous pain pills because of this. I have a constant pain on both sides and in my stomach from the umbilical hernia. The last time I saw a doctor, he said that I'm probably looking at 2 more surgeries. I still have it [the Kugel Mesh Patch] inside.

"This has affected my day-to-day life. There are a lot of jobs that I can't do because I'm in pain all the time. I can't do heavy lifting or anything that causes me to strain. It feels like there are spasms in my stomach and intestines. Because of that first hernia surgery, I wasn't able to join the army and get the sign on bonus.

"Throughout the day, the pain is always there. Sometimes, the pain is extreme. If I push where it hurts, blood and pus will ooze out from my belly button."

More KUGEL MESH News
Tyler faces at least 2 more surgeries to correct his abdominal problems. Even with those 2 surgeries, there is no guarantee that he will fully recover. Although doctors have told him that he does have a Kugel Mesh Patch implanted in his abdomen, they have not yet told him if he has more serious internal injuries, such as fistula. If he does, there is a chance he may never be the same as he was before his initial surgery.

That means that Tyler could face a lifetime of pain and extreme discomfort, not to mention a lifetime of not being able to do what he wants—not being able to work any job he wants or play sports with his friends. Hopefully, Tyler's health problems will go away once the Kugel Mesh patch has been extracted. Then, Tyler can go back to just being a young man—rather than worrying about extreme stomach pain and bloody discharge.