Imagine the disconnect: you've had hernia surgery in the last few years, without complication. Things seem to be fine. All of a sudden, recalls occur concerning the Davol Composix Kugel Mesh Patch, which is followed by a phone call from your surgeon. He says you have the recalled patch and memory ring inside of you, and suggests some of the symptoms you should be watching out for.

One begs to know the definition, and context of 'fine' in cases such as this. The rub is that a product that has a low failure rate (as stated by the manufacturer) is recalled, and similar products that have not experienced failure, are also recalled as a precaution.

And yet, you have no adverse symptoms. All appears well.

Is that supposed to make you feel better? 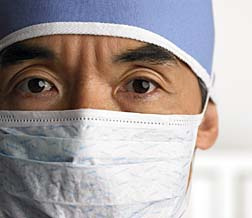 It was just after Christmas in 2005 that Davol, a subsidiary of C.R. Bard, began to beat the bushes amongst its US customers concerning a voluntary Class I recall of the Bard Composix Kugel Mesh Extra Large Patch, and the component-a memory recoil ring, used to expand the patch and hold it in place-that was prone to failure. A follow-up communiqué was issued in January 2006.

Two months later, that recall was expanded to include certain lots of the Kugel Large Patch system, and further expanded in January of this year to include certain lots and product codes of Kugel Mesh which, to that point, had not failed but employed a similar design in the memory ring as those which had failed. As a result, Davol decided to recall the latter as well, as a precaution.

At issue is the memory recoil ring, which plays a key role while inserting the folded patch into the abdomen. When correctly positioned, the ring recoils and expands to deploy the patch, and hold it in place.

The problem, which some patients experienced, was the failure of welds in the memory ring, which could break and expose sharp shards to internal organs.

In documentation submitted to the FDA, Davol revealed a total of six incident reports of ring breakages, with four reports confirmed. The failures were confined to a collection of 25,835 units manufactured between January 1, 2004 and September 30, 2005. Incident rate, based on those six failures, was pegged at 0.023 per cent representing rings bearing the product code 0010202.

Patches bearing a product code 0010204 had NO failures at all, but were recalled anyway by the company, as the concern over potential weld failures concerned the manufacturer.

The redesigned patches involved the change to a less-rigid 0.030" diameter ring, down from a diameter of 0.042" in a ring that presented greater rigidity. The recoil ring overlap was extended on the new rings, and the weld strength was increased to a value of four times the strength found in the old rings.

Here's the problem: you have an old ring, a fact supported by your surgeon. You have not experienced any symptoms of failure, and so long as you don't-you should be fine.

How do you live with that?

There is a recalled entity in your body, right now-and now, for the moment, it seems to be working. But what if it fails? And what will you be doing when it does? Would your movements cause a failure? What if you get up the wrong way from the sofa?

It's like walking around with an unexploded grenade in your hip pocket, a ticking time bomb in your gut.

More News
Some people would be impervious to that kind of worry, but not everyone. And what happens to a worrier, prone to fretting, when informed of the presence of a recalled device buried in their abdomen? What happens to your quality of life?

It's not like you can ask to have the ring removed and replaced. Davol, in its initial communiqué to the FDA, recommended that Kugel mesh patches and recoil memory rings that were continuing to function properly should not be replaced. In fact, the company suggested to surgeons that in some cases, it is a far greater risk to remove a properly functioning patch and its components, than it is to leave it in.

Thus, you are left with what feels like a ticking time bomb that might go off one day. Or it might not. In the meantime, you try not to think about it.

For some, that just isn't possible.