"Kugel Mesh has been a Nightmare," says Patient from his Hospital Bed

Jeff Jones was in the ER at a Toronto-area hospital when he spoke with LawyersAndSettlements. He had come in that morning on his doctor's advice after vomiting all night, and was staying on while awaiting a previously scheduled surgery two days later. It was all part of a long, painful journey that began when his defective Kugel Mesh hernia patch ruptured.

Jones (not his real name pending possible legal action) had had three surgeries over four years to repair recurring hernias. In November 2006, his doctor implanted a Kugel Mesh patch in the hopes that it would prevent further recurrences. But ten days after the surgery, while his incision staples were being removed, Jones says, the Kugel Mesh patch failed and the incision burst and went septic. 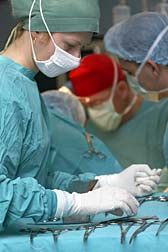 Worse yet for Jones, the Kugel Mesh patch had matted to his bowel; when it failed, his bowel was torn, leaving the mesh patch exposed. As a result, Jones says, "For going on a year and a half now I've had to have daily home nurse care to change the dressings on the open incision—except for when I've been back in the hospital. It's been a nightmare."

Shortly before Christmas 2007, Jones was rushed back to hospital when his bowel ruptured. His surgeon removed the Kugel Mesh patch at that time, but Jones suffered a perforation in his small intestine in the process. He spent Christmas and New Year's in the hospital when the perforation developed into a complex intestinal fistula.

Keeping the fluid leakage from the fistula under control since then has been a constant struggle, and Jones has had to wear a colostomy bag. He says, "I missed Christmas, I missed New Year's. My life revolves around having to empty this colostomy bag in time. It's a full-time job just keeping this thing empty."

Jones has also suffered from a chronic imbalance in his hemoglobin and electrolytes. "That's why I'm back in the hospital now," he says. "My surgery is still on, as far as I know. I'm fairly well stabilized, though I still have some nausea, but I haven't vomited lately. Now they tell me I apparently also have an obstruction in my bowel."

More News
If Jones recovers from his latest mishap, he's scheduled for more surgery in a couple of days. "Like I say, I've got a hole in my bowel, so they want to chop out a four-inch piece and reconnect the ends and repair the original hole. They expect that I'll have a surgical scar that's four by two inches." If this sounds like a nightmare, Jones suggests, "Try living through it."

Jones has been unable to work in his profession as an information technology consultant since the Kugel Mesh patch failed. He's suffered other losses, too—precious ones. "I can't play with my kids, I can't go camping, I can't do anything," He says. "I don't think there's any way to put a price on that. All from what was supposed to be a simple hernia repair."