Patients with Kugel Mesh Patches implanted are the latest to be told that they will have to wait and see if anything goes wrong with their patch before it can be taken out. In what has become an all-too-familiar recall pattern, some Kugel Mesh Patches, like so many products before them, are no longer being implanted but patients who already have the patches implanted cannot have them removed unless their patch malfunctions.

Essentially, their lives have to be put at risk before the patch can come out, despite the high incidence of malfunction in the Kugel Mesh Patches. Furthermore, because Davol Inc. did not respond quickly enough to reports of problems with the Kugel Mesh Patch, more people had the opportunity to have them implanted before a recall was actually announced. In fact, Davol issued a number of recalls, each time adding new patches to the list of recalled products but seemingly failing to recognize that every time they left a patch off the list, more patients were having that patch implanted. 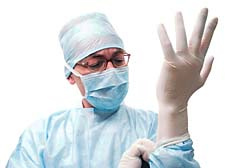 When will companies learn that the longer they wait to issue a recall notice the greater the number of people who will be negatively affected by their products? Instead, companies like Davol receive reports of injury associated with their product, blame doctors for improperly implanting the devices, gather evidence slowly and then months later announce that there is a problem with their product and no new units of the product will be implanted.

Meanwhile, everyone who has the product, like the Kugel Mesh Patch, implanted is stuck wondering if and when their device will malfunction, and if it does malfunction, how severe the consequences will be.

In the case of the Kugel Mesh Patch, the consequences can be quite severe. Some patients have died after their hernia patch malfunctioned. Others have had parts of their bowels removed because of the damaged caused. Still others have suffered bowel perforations, repeated hernias and chronic enteric fistulae.

Patients who have Kugel Mesh Patches implanted that are not on the recall list are left wondering if their patch could fail and when it will be recalled. After all, Davol did not recall all the patches at once. For a while, it looked as though only the extra-large sizes of patch were being recalled, until Davol expanded the recall to include the large sizes.

More News
As Davol congratulates itself on issuing a recall and effectively notifying patients about problems with the Kugel Mesh Patch, reports arise that Davol understated the severity of device-related injuries when reporting them to the FDA. This company that supposedly acted in the public interest waited months to issue a recall, did not properly inform the FDA of the severity of injuries associated with its product, and initially blamed doctors who implanted the Kugel Mesh Patch for its malfunctioning.

And still patients are left playing a game of wait-and-see; hoping that their patch will not be the next to fail and they will not have to be hospitalized because of a defective hernia patch. Unfortunately, it is almost certain that some people who have been fine up to now will suffer a Kugel Mesh Patch failure in the future.

If you or a loved one has suffered bowel perforation or chronic enteric fistulae due to the Kugel Mesh patch, please contact a lawyer involved in a possible [Kugel Mesh Lawsuit] who will review your case at no cost or obligation
Request Legal Help Now