Kugel Mesh Patch: "It feels like your belly's going to fall out on the ground."

Chris Fordham (not his real name pending possible legal action) had abdominal surgery a few years ago. Unfortunately for him, well after the original operation, the incision area unexpectedly herniated. Surgical hernias can be the most difficult type to repair, because the tissue is already compromised. That was why, when Fordham's incision herniated, then strangulated, he was rushed to emergency surgery in Baton Rouge, LA. That's also why the surgeon used a Kugel Mesh patch to try to repair the hernia.

Fordham hoped that was the end of it. Then, less than a year after the hernia procedure, the patch suddenly—and painfully—failed. "You talk about a weird feeling," Fordham says. "It feels like your belly's going to fall out on the ground. I wasn't sure what had failed, but it had to be the patch, because there was nothing else down there to fail." 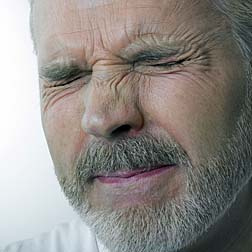 The failed patch left Fordham with a large, painful lump on his abdomen—another hernia, in fact. Because he is among the 47 million Americans without health insurance, he has not been able to have it treated. As a result, he says, "I've been living with, that's all, for the last few years."

Living with it has meant that Fordham is unable to work, at least in part because of the injury's effects. Those effects mean living with chronic diarrhea and daily pain. "Most mornings, it's just the pain of it," he says, "and I don't mean maybe—it just hurts. I can't scream because I'm terrified it might pop open. So there's that, plus the embarrassment of having this big lump on my belly."

More News
Raised in the Mississippi Delta, Fordham joined the Marine Corps on his seventeenth birthday and served a tour of duty in Vietnam. In subsequent years, he taught skydiving in British Columbia, "but I got told by the law there that I had outstayed my welcome," he says today. Eventually he settled in this rural area near Baton Rouge. Formerly a locksmith and gunsmith, Fordham is now retired on disability stemming from back injuries he sustained during his service in the Marines.

When he spoke with LawyersAndSettlements.com about Composix Kugel Mesh Patch, he was spending a pleasant, sunny southern afternoon with his wife and friends. The only thing clouding the day was the continuing worry about his health; he'd like to have his hernia treated correctly and be done with it. "I couldn't care less about getting any extra money out of this," he says. "My primary intent is to get this thing repaired, because if I don't it's eventually going to strangulate again and I'll be up the creek without a paddle. I'll be in really bad shape then."