Clinical studies of a pharmaceutical drug are generally not enough to foresee adverse effects. The antibiotic Ketek is a prime example. Recently prescribed for sinus infections -- from bronchitis to bacterial sinusitis to pneumonia -- it is now only prescribed for the latter, and it also comes with added warnings. This changes came about only because of several reported deaths and multiple cases of severe side effects including kidney and liver failure. 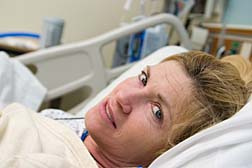 Ketek has had a turbulent past. The FDA came under fire regarding its approval process that allowed Ketek on the market in the first place. Sanofi-Aventis, the maker of Ketek, has been criticized for the safety trials it commissioned regarding Ketek. Criticisms of Sanofi-Aventis include fraud, malpractice, and conflicts of interest.

And now, Ketek's popularity is waning in other countries besides the US. On September 5, Health Canada determined that the benefit-risk for Ketek no longer supported its use for sinus infections other than pneumonia after it reviewed reported cases of severe liver injury.

Even though Health Canada and the FDA has issued these warnings, Sanofi-aventis Canada hasn't gotten around to changing this important information on its website. As of today, September 11, 2007, the company has the following [ information] under indications and clinical use:

Confusing?
Sanofi-aventis states the following in its warnings page:

"Physicians and patients should monitor for the appearance of signs or symptoms of hepatitis, such as fatigue, malaise, anorexia, nausea, jaundice, bilirubinuria, acholic stools, liver tenderness, hepatomegaly, or pruritis. Patients with signs or symptoms of hepatitis must be advised to discontinue Ketek and immediately seek medical evaluation, which should include liver function tests."

Doctor's Guide website says that "product-related adverse reactions depends on health care professionals and consumers reporting them." It goes on to say that "post-marketing adverse reactions are generally presumed to underestimate the risks associated with health product treatments." In other words, if you have taken Ketek and have experienced any adverse side effects, tell your doctor sooner than later. And you might want to contact a lawyer.