Two years ago, Teresa Virgin was prescribed Ketek for a simple sinus infection. It was almost her death sentence. "I went through 65 days of hell, including three hospital visits and my teenage kids thought they were losing their Mom," says Teresa.

"Within two days of taking Ketek, I got so sick," says Teresa "My whole body felt drained and I had no energy. I couldn't sleep because I had trouble breathing then it got so bad that my husband took me to ER. I also had severe diarrhea.

"By time I got to ER, my breathing was compromised. 'What meds are you taking?' they asked right away. At that time I wasn't on anything else except Ketek. I was hooked up to IV all day and went home that night, then threw the pills out. I had only taken two. 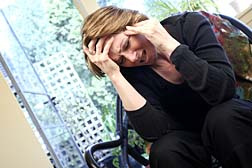 The next day I started to have nausea, abdominal pains and even worse fatigue. I couldn't eat or drink and just taking a sip of water was a chore. I went back to ER, and back on the IV again. Once I got some fluid in my body I felt a bit better -- since I was having severe diarrhea it helped.

Back home again. A few days later I was still feeling like death warmed over. My husband was talking to our family doctor and discussing how sick I was. He gave my husband another prescription—for Ketek! 'You've got to be kidding, this is what made her ill to begin with,' he said. Our doctor just told him to take me back to ER.

On the third day at home, I had terrible chest pains and lost vision in one eye. Back to ER yet again and this time I was admitted. I thought I was dying—my husband didn't know what to do. They monitored my heart, gave me IV and ran a lot of tests. The chest pains stopped after a few days and my vision returned.

This time we saw a gastroenterologist and finally got some answers. He explained to us that severe diarrhea messed up my colon and that it would take a few months to straighten out. I also got an infection called Clostridium difficile. [most commonly contracted from hospitals]. He started me on a treatment to get rid of the infection.

It gets even worse. While I was on this treatment, I got a staph infection in my eye socket because my immune system had been comprimised. This is not a year I want to remember—I was back in the hospital for the fourth time!

With my immune system crashed, they put me on 10 days of heavy antibiotics and after 10 days, I was back on my feet, feeling like a new person. I've been fine ever since and gained my weight back—I went from 220 lbs to 172 lbs in weeks. And I didn't work from May 7 until July 18th.

During those 65 days that I was sick, I went through a severe depression. I thought I was losing my mind because I had no control over my life—I felt that I was dying. My teenage kids thought they were losing their mom; it was pure hell. They had enough on their plates without seeing their mom going through that.

More News
I was so depressed that I went to the local mental health clinic and they put me on Zoloft--after a while it helped. Here is the interesting part: one of the nurses I talked to asked why I was at the clinic. I told her about Ketek and she started crying: her brother died from taking Ketek - from liver failure.

We have since looked on the Internet and it amazes me how many people have had serious side effects from this drug. I was amazed at the coincidence of running into that nurse - how many more people have been affected? I have told everyone I know about Ketek - nobody I know will ever take that stuff.

One of the nurses at my new doctor's office told me that she had a sinus infection and during this time, a Ketek rep was visiting the office. She told the rep about my reaction but he just shrugged it off. He gave her some Ketek samples. Within two days she couldn't see out of one eye. This nurse also said, 'never again'.

It is unbelievable that this drug was prescribed to me. From now on, I will only take drugs that have a 'clean' history."