A new bill related to Kansas City motorcycle accidents could allow those over the age of 21 to not wear a helmet while riding the vehicles, reports KSPR, a local ABC affiliate. 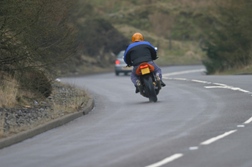 According to Missouri's current legislation, all motorcycle drivers or passengers are required to wear a helmet while riding the vehicle. However, some drivers recently told the Missouri Senate's Transportation Committee that helmets can be a burden in some cases.

"It's the feeling of freedom that you get," said Mark Chapman, chairman of Freedom of Road Riders, which is an anti-helmet group. "You can ride down the road and be one with nature basically. You feel and smell and hear everything that goes on."

Chapman added that helmets can affect a person's hearing, claiming that the best way to prevent injury from a motorcycle crash is to avoid the accident in the first place.

The new bill was reportedly passed by the Senate Transportation Committee, but it will now be debated on the Senate floor, according to the news provider.

The bill is being examined in Missouri on the heels of a recent Johns Hopkins University study that indicated motorcycle helmets help to reduce the risk of spinal injuries, according to HealthDay News.

If you or a loved one have suffered losses in this case, please click the link below and your complaint will be sent to an accidents lawyer who may evaluate your Kansas City Motorcycle Accident claim at no cost or obligation.
Request Legal Help Now