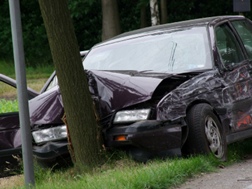 According to the news provider, the man's nine-year-old son and the driver of another vehicle were injured in the collision, which occurred west of Interstate 435 in Kansas City.

Police said that the man lost control of his Nissan sedan, which collided with the other vehicle and flipped into the air, landing face-up against a tree.

"We have a witness," Sgt. Bill Mahoney said. "Speed and impairment are both under investigation."

Police added that the nine-year-old passenger inside the Nissan suffered injuries that were not believed to be life-threatening. The accident reportedly occurred around 12:30 in the afternoon.

The driver of the other vehicle, an 18-year-old man from Raytown, Missouri, suffered minor injuries in the accident, police said.

According to the National Highway Traffic Safety Administration (NHTSA), there were 878 traffic fatalities in the state of Missouri in 2009.

If you or a loved one have suffered losses in this case, please click the link below and your complaint will be sent to a lawyer who may evaluate your Kansas City Car Accident claim at no cost or obligation.
Request Legal Help Now