Oil on the road reportedly caused a Kansas City car accident that sent four people to the hospital. 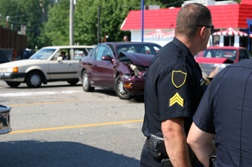 Police in Kansas City, Missouri, said that oil on Blue Parkway Road was responsible for the crash between a car and a minivan, according to Fox4KC.com. The accident occurred around 3:30 am.

According to police, the oil was on the road from another vehicle that had crashed into the median earlier. The accident caused the vehicle to leak oil on the road, ultimately causing the subsequent crash between the car and the minivan.

The news source reports that the oil has since been cleared off the road and Blue Parkway Road is now safe for travel.

According to statistics from the Missouri Department of Transportation, there were 754 crashes that occurred between 3 am and 4 am across the state in 2009. That's the second lowest total for any hour, with 4 am to 5 am seeing only 714 vehicle crashes in Missouri during 2009.

If you or a loved one have suffered losses in this case, please click the link below and your complaint will be sent to an accidents lawyer who may evaluate your Kansas City Car Accident claim at no cost or obligation.
Request Legal Help Now