The Beasley Allen law firm in Montgomery, Alabama has been at the forefront of personal injury and wrongful death cases launched against Johnson & Johnson over the effects of its longstanding talc based baby power product. It’s alleged that constant exposure to the product has caused ovarian cancer in women. 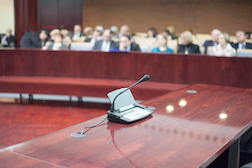 The firm is currently involved in baby powder litigation in New Jersey and was dumbfounded when a state court judge struck two of its expert witnesses from the list of persons scheduled to testify earlier this month.
“These witnesses, Dr. Daniel Cramer, who is from Harvard and is with the Brigham & Women’s Hospital in Boston, and Dr. Graham Colditz from Washington University in St. Louis, are two of the most qualified medical scientific researchers in the country,” says Jere Beasley, one of the Beasley Allen lawyers in the ongoing litigation.

Dr. Cramer, interviewed by Lawyers and Settlements on February 14, 2016, has authored five studies on the link between ovarian cancer and the long term use of baby power. He believes that popular, sweet smelling power is responsible for thousands of cases of ovarian cancer in the US every year.

In 2013, Dr. Cramer testified at the Diane Berg case, the first ever baby powder case against Johnson & Johnson, in North Dakota. “For the trial I pulled together all the data that I had. It showed that when you consolidate all the information, you can clearly see a causal link between talc and ovarian cancer,” says Dr. Cramer.

“Only 25 percent of women develop ovarian cancer before menopause. Deane Berg was premenopausal when she was diagnosed with stage-3 ovarian cancer. She had no family history of the disease, and no other risk factors such as the BRAC1 and BRAC2 gene,” says Dr. Cramer.

“We calculated that she had had more than 8,000 applications of talcum powder. Tests showed the talc was in her ovaries, her endometrium and lymph nodes,” he adds.

Since then dozens of other suits on behalf of women with ovarian cancer have been filed against
Johnson and Johnson - two of which Johnson & Johnson have already lost.

More DRUGS & MEDICAL News
In May, 2016 the giant pharmaceutical company was ordered to pay $55 million in talcum powder damages suits.

In February, 2016 a jury awarded $75 million to the family of Jacqueline Fox. Her lawyers argued Johnson & Johnson knew of the cancer risk and failed to warn the public. Fox was a long-time user of baby powder. Fox died of ovarian cancer at age 52 before the verdict was delivered.

Attorney Jere Beasley says he believes the New Jersey state court decision will not stand and will be reversed on appeal.

If you or a loved one have suffered losses in this case, please click the link below and your complaint will be sent to Drugs/Medical Lawyer who may evaluate your claim at no cost or obligation.
Request Legal Help Now