Still Too Soon to Take Echeverria to the Bank

The plaintiffs’ bar is literally agog at the $417 million awarded by a Los Angeles jury to a woman who developed ovarian cancer after using Johnson’s Baby Powder for decades. The Johnson & Johnson lawsuit is the first talcum powder lawsuit to go to trial in California. Plaintiffs should certainly feel heartened at the outcome, but there are three major hurdles to be faced in the cases that follow. 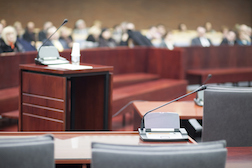 The award is gigantic, nearly four times bigger than the previous verdict of $110 million. It includes $347 million in punitive damages on top of $70 million to compensate the plaintiff for her harm. Punitive damages are intended to punish a defendant for bad actions, and in this case, it appears the jury was incensed that J&J had failed to warn consumers of the cancer risk.

Appellate courts take a much cooler view of punitive damages. On appeal, it will not be surprising if the award is reduced to a sum more in line with previous cases.

The evidence of a link between body powder and cancer is not air-tight. J&J has consistently maintained that studies linking talc to ovarian cancer are based on flawed science, citing numerous regulatory agencies that have declined to require warning labels on talc-containing products. In Eva Echeverria v. Johnson & Johnson, they mounted a vigorous defense and introduced experts and studies to dispute the causal relationship between talcum powder and ovarian cancer.

In many ways, Echeverriawas a contest of dueling experts. A reasonable jury in a following case could easily find J&J’s evidence more compelling, since evidence has no precedential value from one case to the next.

More TALCUM POWDER News
Finally, California is famously plaintiff-friendly when it comes to personal injury suits. However, only a small fraction of the nearly 5,000 talcum powder lawsuits now pending can be heard there. The recent Supreme Court decision in Bristol-Myers Squibb v. Superior Court of California limits the jurisdiction of California courts to cases where either the plaintiff or the defendant are residents of California or otherwise have sufficient contacts within the state.

J&J is a New Jersey corporation. Eva Echeverria had access to California courts only because she lives there. To date, only about 300 plaintiffs are similarly situated. In Missouri, where a handful of talcum powder cases have been tried, the awards have been much smaller, ranging from $110 million to $55 million, and not all cases have been decided in favor of the plaintiff. Jurisdiction can make a big difference in the outcome of a case.

In any legal contest, success depends in part on a realistic appreciation of the other side’s case, and J&J can be depended upon to be a formidable opponent. Post-Echeverria, however, the momentum certainly seems to be with talcum powder plaintiffs.