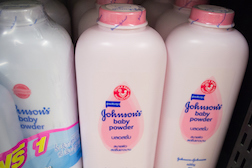 The US Judicial Panel on Multidistrict Litigation (JPML) on May 31, 2017 ordered that four lawsuits filed by plaintiffs who allege that they got ovarian cancer from using Johnson & Johnson's (J & J) talcum products such as Johnson's Baby Powder or Shower to Shower be transferred to a New Jersey multidistrict litigation (MDL).

The federal court system employs multidistrict litigation to consolidate large numbers of similar lawsuits for easier management under one judge for pre-trial discovery.

The other lawsuit Moore et al v. Johnson & Johnson et al, Case No. 2:17-01164 is from US District Court, Eastern District of Pennsylvania.

Recent jury verdicts against Johnson & Johnson for talcum powder lawsuits have been steep, awarding millions of dollars to plaintiffs.

In May 2017, a St. Louis jury delivered a $110.5 million verdict against Johnson & Johnson in a talcum powder lawsuit filed by Lois Slemp of Virginia, according to the St. Louis Post-Dispatch.

After the recent $110.5 million verdict, J & J posted a statement on its website:

More TALCUM POWDER News
"We deeply sympathize with the women and families impacted by ovarian cancer. We will begin the appeals process following today’s verdict and believe a jury decision in our favor in St. Louis in March and the dismissal of two cases in New Jersey in September 2016 by a state court judge who ruled that plaintiffs’ scientific experts could not adequately support their theories that talcum powder causes ovarian cancer, further highlight the lack of credible scientific evidence behind plaintiffs’ allegations. We are preparing for additional trials this year and we will continue to defend the safety of Johnson’s Baby Powder."