A talcum powder cancer lawsuit filed in state court by multiple plaintiffs in Missouri has been removed to federal court by attorneys for Johnson & Johnson, who may transfer the case to a multidistrict litigation in New Jersey. 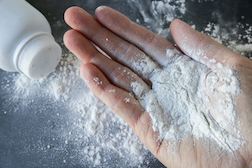 The federal court uses multidistrict litigation (MDL) to manage large numbers of similar cases by transferring them to a single judge for pre-trial discovery.

More TALCUM POWDER News
In Oct. 2016, the Judicial Panel on Multidistrict Litigation issued an order establishing MDL No. 2738 regarding Johnson & Johnson talcum powder products marketing and sales practices to go before US District Judge Freda L. Wolfson, US District Court for the District of New Jersey.

In a motion for removal of the Jackson County lawsuit to federal court, attorneys for Johnson & Johnson gave notice of their intention to attempt to seek transfer of the case to the New Jersey MDL.

There are currently two upcoming trials for talcum powder lawsuits against Johnson & Johnson scheduled within the next few months in St. Louis.