The US Food and Drug Administration (FDA) has approved a new diabetes drug that is expected to compete with Januvia for a share of the diabetes medication market. Although the drug is believed to have heart risks, it is not yet known if the drug’s risks are similar to Januvia side effects. Some studies have suggested a link between Januvia and pancreatitis, with the FDA issuing a warning about the risk in 2009. 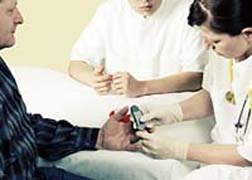 The new drug is made by Johnson & Johnson and is known generically as canagliflozin. In January 2013, an FDA advisory panel voted that the drug is safe, but also noted that the pill does come with concerns about heart risks. The FDA will likely make a decision about allowing the drug on the market in the coming months, according to Businessweek (1/10/13).

Januvia, known generically as sitagliptin, is used to treat type-2 diabetes and was approved by the FDA in 2006. In 2009, the FDA announced revisions to the drug’s warning label to alert patients to the risk of Januvia side effects. At the time, the FDA noted it had received 88 adverse event reports of acute pancreatitis in patients using sitagliptin (either Januvia or Janumet, which is a combination of sitagliptin and metformin) between October 16, 2006, and February 9, 2009.

Of those 88 cases, two involved hemorrhagic or necrotizing pancreatitis. Fifty-eight of the patients were hospitalized and four of those were admitted to intensive care. Furthermore, 19 of the cases occurred within 30 days of starting sitagliptin therapy and 47 cases resolved after the patient discontinued sitagliptin use. The FDA noted that in 45 cases, the patient had at least one other risk factor for pancreatitis.

More JANUVIA News
In 2012, Merck, maker of Januvia, received a warning letter from the FDA, citing the company’s failure to meet certain milestones regarding a post-marketing study investigating the safety of Januvia and Janumet. In its letter, the FDA noted that the study was meant to “assess a signal of a serious risk of acute pancreatitis, including necrotizing forms, associated with the use of sitagliptin,” (2/17/12).

According to the FDA, the study was to be a three-month analysis of the risk of pancreatitis in rodents. When Merck submitted its study protocol, the FDA reportedly requested changes, deeming the study’s design proposal inadequate. Ultimately, Merck submitted study data from an investigator-initiated study, but did not submit a protocol for the study and therefore the study was not approved by the FDA. The FDA noted that Merck did not comply with the timetable and did not show a good reason for not having conducted additional testing. Merck has reportedly said it will comply with the FDA’s requests.