An IVC filter lawsuit that was originally tossed out by a trial court due to the absence of an expert witness has survived after all, following a ruling by the Kentucky Supreme Court that the trial court judge was too hasty in dismissing the lawsuit. 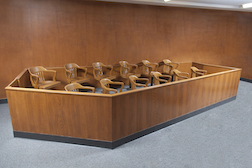 According to court documents, the plaintiff in the IVC filter case is Jacqulyn Harrington. She alleges the inferior vena cava filter she received broke apart, with fragments migrating to her lungs. Harrington suffered injuries as a result.

The latter is what happened in this case.

An inferior vena cava filter is a common treatment option for patients at risk for stroke and other cardiovascular issues who have trouble tolerating blood thinners. The IVC filter is designed to be inserted via a catheter and placed in the inferior vena cava – the primary artery that carries deoxygenated blood from the lower extremities up to the heart and lungs. Blood clots – which can cause a stroke – often form in the legs and sail up to the heart and lungs, where blood clots can cause serious health implications – even death. The IVC filter is a spider-like entity that lounges in the inferior vena cava allowing blood to flow through it, but at the same time is designed to ‘catch’ a blood clot and hold it in place.

Most IVC filters are designed for temporary use, and require removal once a blood clot has been corralled or the immediate danger of blood clot has passed.

The brand of IVC filter related to this IVC lawsuit was not identified. However the Bard IVC filter is one product that has been the target of much litigation alleging device migration and failure / fragmentation. Specifically, the Bard G2 IVC filter was developed by C.R. Bard to succeed an earlier generation filter that was alleged to be problematic – although there was no Bard IVC filter recall. The Bard G2 filter has been characterized as holding little improvement over the previous design.

The Bard IVC filter is one of the more commonly-used filters, along with Celect IVC filters manufactured by Cook Medical.

According to court records, the initial suit was tossed in trial court following opening statements by the plaintiff’s IVC filter attorney that the plaintiff did not intend to call an expert witness. The trial judge deemed the case un-survivable without the expert witness and dismissed the case outright. The plaintiff appealed, with the appellate panel determining that the case was, in the Court’s view survivable.

One aspect of the case expanded by the appellate panel was the testimony of the plaintiff’s physician – the defendant – during pre-trial depositions that one of the risks associated with the IVC filter was that it could fracture and migrate, even though the potentiality for fracturing was not spelled out in the pre-surgery consent.

“Therefore, the only issue remaining was the factual question of whether the information he provided about those risks, ‘migration of filter,’ would provide ‘a reasonable individual’ with ‘a general understanding’ of the risk that the filter could break into fragments which could then migrate to other bodily organs,” the majority said in a 12-page opinion. “That factual question is one that could readily be resolved by reasonable jurors without the assistance of expert testimony.”

“I do not believe that a jury of laypersons, without guidance from providers who perform similar treatments or procedures, i.e., expert witnesses, can independently determine whether a risk is substantial,” Keller wrote in a 12-page dissent. “Thus, Harrington was required to present expert testimony to at least establish the substantiality of the risk, and I cannot fault the circuit court for directing a verdict when Harrington admitted she had no such expert.”

It is not known if the IVC filter side effects case will be appealed further.