A new study recently published in the New England Journal of Medicine (06/08/17) with regard to the potential for diabetic ketoacidosis (DKA) shows that type 2 diabetes patients on sodium-glucose cotransporter 2 (SGLT2) inhibitor drugs appear to have double the risk for DKA when compared with patients using dipeptidyl peptidase-4 (DPP-4) inhibitors. Invokana is a member of the SGLT2 class, and ample concern has been expressed over Invokana linked with cardiovascular injuries and kidney failure. 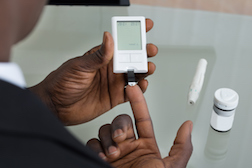 And yet, the lead author of the study notes that in his view SGLT2 drugs not only retain their viability in the face of such risks, but remain beneficial for the intended patient class. In a statement to Medscape Medical News (MMN 06/07/17), Dr. Michael Fralick, MD of Brigham and Women’s Hospital in Boston admitted that a doubling of risk for DKA “sounds frightening,” he said, “but the absolute risk is quite small…I still think this is a very good class of medications and for certain patients will continue to be.”

Dr. Fralick and colleagues used a claims database of commercially insured US patients (Truven MarketScan) and identified 50,220 type 2 diabetes patients who had received a new prescription for an SGLT2 inhibitor and 90,132 initiating a DPP-4 inhibitor (chosen as the comparator class because it is used similarly to SGLT2 inhibitors, as second-line after metformin for type 2 diabetes, but has no known link to DKA).

That’s about five, to eight patients out of 1,000 that can statistically expect to develop DKA, Fralick told MMN, adding that in his view and those of his colleagues SGLT2 inhibitor patients should be strictly monitored for signs of DKA soon after starting the medication, as warning signs “can happen relatively quickly, so that’s why I think it’s important right after patients are started on these drugs that they’re closely monitored and the clinician considers ordering bloodwork,” he advised.

More INVOKANA News
Fralick and his colleagues did not identify one, specific SGLT2 inhibitor used in their study. However, he did note that the same database used in the aforementioned study will also serve as the foundation of a further study examining the risk of amputation with use of canagliflozin (Invokana), indicating to MNN the results of that study should be known in a few weeks. Earlier this spring the US Food and Drug Administration (FDA) announced a black-box warning for Invokana with regard to a risk for amputations.

Meanwhile, additional findings from the Canagliflozin Cardiovascular Assessment Study (CANVAS) were due to be released during the American Diabetes Association 2017 Scientific Sessions on June 12.

CANVAS has already informed regulators and health advocates with regard to the risk for DKA and fracture risk within the SGLT2 inhibitor class – and, specifically the doubling of lower limb amputations associated with canagliflozin and Invokana side effects.

The Invokana amputation risk revealed through CANVAS is what prompted the FDA to mandate a black-box warning for Invokana adverse reactions over the risk of lower extremity amputation.