The latest word on internet fraud has nothing to do with a fictitious inheritance scam from Nigeria or a rare magazine you bought on eBay and never received. The latest scam takes advantage of the mushrooming popularity of Facebook and other social networking sites by hooking victims into thinking they are being solicited by their own family members or Facebook friends. 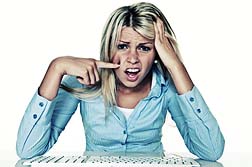 For example: in September, an advertisement for a colon cleanser was posted to Facebook, purportedly by a woman from Nova Scotia. In reality, the woman had succumbed to breast cancer some nine months before.

Cyber security gurus at Cisco Systems Inc. say that social networks have become the latest "playground for cyber criminals." Henry Stern, senior security researcher for Cisco in Canada, told CanWest News Service that "there is an excess of trust in social networking."

Hackers will hijack a collection of webmail or social networking accounts, and then extort funds from the victim's contacts. Messages are sent out to family and friends pleading for help from abroad: a stolen wallet or purse, credit cards gone, no cash, someone made off with their cell phone…

More TECHNOLOGY News
Given access to the hijacked account, the scammer will study how the signatory speaks or writes, crafting the plea in a fashion that may convince a recipient that the request for assistance is coming from the real person.

"One of the big differences here is that with the Nigerian scam e-mail, the traditional one, the people who get caught up in it really should be knowing better," Stern said. "But with these, it's someone trying to do the right thing and getting burned for it."

This breed of identity theft is beginning to happen with alarming frequency, said Stern to the Vancouver Sun on December 29.

Facebook hit the 350 million mark in users this year. As social networking is expected to grow into 2010 and beyond, more businesses are realizing the value in social media participation.

So too, it seems, are the purveyors of Internet fraud.

If you have suffered losses in this case, please send your complaint to a lawyer who will review your possible [Technology Lawsuit] at no cost or obligation.
Request Legal Help Now

Posted by
yasmine
on March 10, 2011
I have just escape from a history of scam on facebook! A man with whom I become friend on facebook...
Little by little he asked to meet me in the country where I live..I accept...
Immediately after he asks for cash money 2000 $ telling me that he was in Greece and its travel agency accept only cash! which is absurd!
Well sure I ‘ve seen the scam in its arguments ..
I told him that this a scam … of course he denied and swear that he will no longer ask for money proof of her sincerity!
After few days he asked instead of $ 2000 he asked for $ 1000 abd than for £ 300 for his daughter living in London!
Anyway, fortunately I discover the deep thought of this frauds man
On seeing your forum I decide to witness on what happen to me …It could be helpful

It seems that these scams are originated from Africa because this man at the end of each of these emails there had written "Sent from my BlackBerry wireless device from MTN".

MTN is a telephone operator based in Africa

Posted by
Ed Kalish
on January 12, 2011
My wife and I were recently hooked by the following web site on Facebook: www.web6actionnews.says.it

This site offers something called Acai Complete 6 Program to lose weight (this program can be googled).

This site was falsely appended to a message supposedly sent by one of our Facebook friends, alleging that they had tried the product featured on the site. The message even included the friend's profile photo, so we thought it was legitimate. No sooner had we used a debit card to access what looked like a very good introductory offer to a good product, than we were contacted by an agent from a "card services" organization that said our debit card had just been used for a $99 purchase from Cyprus (the agency blocked this debit), as well as a large debit from the vendor which apparently oversees the Acai Complete 6 Program: Maxway Marketing LLC of Carson City, NV. We should have contacted our Facebook friend directly before ordering the product. The friend denied that they had anything whatsoever to do with this false posting. We are now in the process of trying to recoup our potential loss, both through our local bank which issued the debit card (which we've cancelled), as well as through ic3.gov/complaint/default.aspx, a web site that takes internet fraud complaints.