Apple has generated enormous customer loyalty with its line of computers and personal electronics. However, a recent report claims that many users of the company's immensely popular iPhone may routinely commit insurance fraud in the hopes of picking up the newer, faster models. 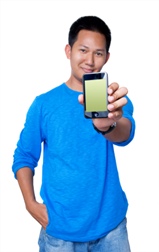 Carmi Korine, a director at Supercover Insurance, claims that the number of lost, stolen or damaged phone complaints grows exponentially every time Apple launches a new generation of smartphone technology. Many service plans for the popular gadget allow the consumer to receive a replacement phone in the event of theft or irreparable damage - and those replacements are usually the latest model of the phone.

Supercover tells PCR Magazine that iPhone owners are 60 percent more likely to take out insurance on their phone than users of any other brand.

"While most customers take out insurance because they value their iPhone, we started to notice increases in claims as new and upgraded iPhones were launched - for short periods around new model or upgrade launches, claims for lost, stolen or damaged iPhones go through the roof," Korine told the magazine.