Attorney Fought for More and Got it

The company offered to settle, but attorney Donald Shapiro pressed on to trial anyway believing that ADM Bioproducts owed a lot more to the family of Francisco Moreno Garcia, a young man who was scalded to death in a gruesome injury in Decatur, IL. "We made a very compelling case," says Shapiro, "and I think the jury took into account that this was a very close knit family. There were two parents and five brothers and sisters that each suffered a great loss." 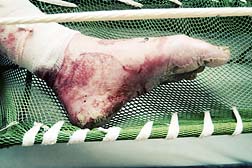 In March, 2007, 26-year-old Garcia was harnessed and hanging 15 feet in the air as he worked wrapping insulating around some pipes in the plant. A nearby compression system that super heats waste products burst open. Much to the horror everyone around him, Garcia hung helplessly in the air as the steam and caustic liquid burned 90 percent of his body.

He managed to free himself from the harness and dropped to the plant floor.

A nurse at the trial testified this was the worst burn case she had ever seen in her career. Every part of Garcia's body was burned except for his head covered by his hard hat and the soles of his feet.

He died an excruciating death about 36 hours after the accident. "He had tremendous pain and suffering in the day and a half before he died," says Shapiro.

Garcia immigrated to the US when he was 18 years old. He sent money home to his family in Mexico every month and visited regularly.

ADM Bioproducts, a huge multi-national company with 260 plants around the world, admitted its liability. However, it denied that his parents and five brothers and sisters were his next of kin. "ADM Bioproducts claimed that Garcia was secretly married," says Shapiro. "But there was no wife around. There was no testimony about any relationship. He had just filled out some forms indicating he was married because someone had told him it would reduce deductions from his paycheck."

In the end, the jury awarded the Garcia family $6,741,730.61. "It is always good when the jury awards more than the company was offering," says Shapiro. "The highest wrongful death award in Decatur (Macon County) before the Garcia suit was just $1.5 million."

More Personal Injury News
It might have even been higher, surmises Shapiro, if the plant had not admitted liability and the jury had heard about problems with the waste compression system just in the hours and days before the accident. "The jury didn't really hear all the facts. That might have motivated them to grant an even larger award," says Shapiro. "I think they would have really thought poorly of ADM had they known some of those details."

Donald Shapiro is a graduate of the University of Illinois (Urbana) and earned his J.D. at the University of Chicago Law School (1974). His practice includes medical malpractice, birth injuries, birth defects and personal injury cases. Shapiro has won a number of multi-million dollar verdicts since he began working as a trial lawyer in 1978.