Job applicants should expect their personal information to remain confidential and strictly for the use of the job application. However, a Belleville, Illinois restaurant manager has been cited with fraud and a violation of Illinois employment laws after a handful of employees and job applicants in Illinois discovered that she had stolen their identities for her alleged personal gain. 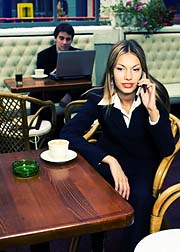 The Belleville News-Democrat reported over the weekend that Jennifer Lynn Schoenbeck, a former delivery person who eventually moved into the restaurant business, was convicted of fraud and would spend more than four years in federal prison for her indiscretions.

According to the report, Schoenbeck, 31, supervised restaurant employees and processed job applications. As a result, she had access to the personal information of both employees and applicants.

The defendant is reported to have taken the personal information of at least 11 individuals and opened online bank accounts in their names. Schoenbeck then acquired debit cards, which she used to withdraw money and apply for consumer loans. She handled all these transactions online and had funds deposited directly into the fraudulent accounts.

More ILLINOIS EMPLOYMENT LAW News
The US Attorney's Office reported that Schoenbeck was convicted of three counts of wire fraud, four counts of mail fraud and one count of aggravated identity theft. Following a guilty plea, Schoenbeck was sentenced to four years and six months in federal prison, coupled with three years of supervised released. The defendant will also have to repay $13,176.99 in restitution and another $800 in special assemmment fees.

This isn't the first time Schoenbeck has found herself in legal hot water. In an unrelated incident in 2006, Schoenbeck pleaded guilty to 18 counts of mail fraud and served four months in prison before her release on parole. At that time the defendant was ordered to pay $22,479 in restitution.

Illinois labor and employment law serves to ensure that employers do not take advantage of their employees. Illinois employment law, however, has no jurisdiction over allegations of fraud.

If you have suffered losses in this case, please send your complaint to a lawyer who will review your possible [Illinois Labor Law Lawsuit] at no cost or obligation.
Request Legal Help Now