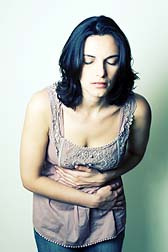 "I was taking Hydroxycut because it is listed in all the magazines and the stores tell you to use it [to lose weight and keep it off]," Jo says. "This past 2 years [since she started taking Hydroxycut Max], I've been going back and forth to the doctor. I feel like a hypochondriac because they never found any problems with me.

I've been very lethargic, I have chest problems and stomach problems, pain whenever I eat and I'm constantly dizzy. I am very weak. I'm in bed 3 to 4 days a week. I haven't been able to work. Headaches are a daily occurrence and I had a whole month where I was vomiting all the time. I did not go 2 days without vomiting. I was supposed to get married this year but we postponed it due to illness. I thought I had a bad flu, the doctors even thought I had pneumonia. I feel like I've aged about 40 years because of this.

My boyfriend saw something about Hydroxycut on television and told me about it. That was about a month ago and I stopped taking it after that. I was taking a bit less than the recommended dose of Hydroxycut Max because too much of it gave me the shakes.

More HYDROXYCUT News
I mentioned it to my doctor 2 weeks ago. It was a short appointment, but she became concerned—worried about liver damage—so she ordered some tests and asked me to come in for a longer appointment. I've had blood work and a chest x-ray and I'm waiting for the test results.

I wish I had read more about Hydroxycut when I got it. I saw it in every magazine but I didn't read about it. People should read more about what they are taking, even if [the supplements] are herbs. They should also mention it to their doctor. Hopefully nothing is life-threatening for me, but I feel it has changed my life."