“We Can Light Our Water on Fire,” Says Fracking Victim

Joe and Dawn live in a part of Ohio that has seen a boom in the gas, oil and shale industry. And with it has come a fracking problem, to the point where they can light on fire water from their well. Because of fracking, their once artisan spring water is contaminated with methane gas. 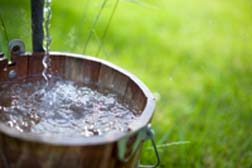 The oil and gas industry was already here when Joe and Dawn bought their 4-acre property 18 months ago, but so was their clean water. “We bought the property knowing we had fresh well water, supposedly fed by artisan springs,” Joe says. “Our whole property is surrounded by gas wells, storage tanks, a pipe line, the works.” Of course, Joe and Dawn knew the structures were here and they knew there was some gas activity before buying, but not to this extent.

“If we look out our front door, there is a storage tank facility to the right, in the woods,” says Joe, “and straight across the street from us there is a well with a working pump in the middle of a field. There is also a transmission shed at the front of our property. But within the past year, this booming industry now has helicopters overhead, gas trucks up and down our street and there is hydraulic fracking everywhere.”

Joe says the Ohio Department of Natural Resources ran tests on their well water a few months ago and confirmed it does indeed contain methane gas. “They told us that you can light the water on fire when the water spits - because methane gas gets in the line, it causes the water to spit a pretty big fire ball. Naturally, we can’t use the water for consumption anymore.

“The oil and gas officials are finding very little leakage in our well at the top but we have a 285-ft. well and the methane is seeping in at the bottom, so the pressure of the water doesn’t allow it to escape out the top: there is nowhere for it to go except through our pumps when we turn on the faucet. And when it compresses in the hot water tank, it starts spitting out of the tap.”

Joe and Dawn are also concerned about their health. “Everyone living here has breathing issues,” says Dawn. “My migraine headaches have intensified and now I have arthritic problems, like I’ve aged 10 years since moving here. We’ve been bathing in methane!”

Joe and Dawn called some of the gas companies to determine whether there were any problems on their end. Negative. They sent letters to state representatives but haven’t got a word back. The Department of Natural Resources told the oil and gas companies to check everything within a one-mile radius of their house, but they are only able to check on the surface.

“They don’t have a clue what is going on underneath,” Joe explains. “The Department told us to install some kind of aeration system to the tune of about $6,000 and put in carbon monoxide and methane detectors. Meanwhile, we have to truck in water for cooking and drinking. Luckily, a few family members who live close by have city water - we fill 20-gallon jugs every few days.”

More HYDRAULIC FRACTURING News
Joe says they have read a few articles where people had similar methane gas issues and they had to drill new wells. Joe has tried to contact his neighbors, but at this point he doesn’t know if they have similar problems. (A few years ago a community in New York banded together and filed a fracking lawsuit.)

“If our well wasn’t so deep, it probably wouldn’t be so bad,” Joe adds. And because of the methane gas, we cannot treat the well, so bacteria is now growing in it. Around these parts, the average well depth is 120 ft. We have been given an estimate of $6,500 to drill a well of that depth, money we don’t have. I would like to see the gas companies paying for this. In the end, all that really matters is that my family has fresh water.”

Posted by
tom d
on September 24, 2013
artesian is the correct term for a bored underground water well under pressure not artisian that is a skilled craftsman who does decorations.
Posted by
L. Tichenor
on June 1, 2013
This family purchased property with an "artesian"
well not an "artisan" well. Despite the problems with bacteria and methane, it remains an "artesian" well. Where is the bacterial contamination of this well coming from? Has this homeowner contacted the county extension service for advice on how to manage this well?
Posted by
ed
on May 19, 2013
it would not just be methane that can ignite but fracking also stirs up and releases radon . Radon is the number two cause of lung cancer in America . Air and water contamination that cause cancer and death . The injection wells that the waste water will go to , causes earthquakes. BAN FRACKING !!!!!!!!!!!!!!!!!!!!!!!!!!!! It is a matter of life or death . A matter of self-defense .
Posted by
Cameron Williams
on May 19, 2013
Some fracking facts (I hope they're helpful):

Industry claim: Natural gas burns clean, and reduces our carbon footprint.
FACT: Horizontal fracking is one of the most carbon-intensive means of producing fossil fuels. Once obtained, methane (natural gas) is 21 times more potent as a greenhouse gas than carbon dioxide (CO2). Fracking will intensify climate change unless well-head leakage can be kept to less than 2% (not currently possible).

Industry claim: Groundwater can’t be contaminated by fracking; hydrofracking takes place 5,000 to 10,000 feet below existing underground aquifers. There are no documented cases of groundwater contamination from fracking, methane is naturally-occurring in some wells.
FACT: Talk about bait and switch! Most cases of household water being flammable are attributable to naturally occurring orthogenic/biogenic (near surface) methane; the methane obtained by fracking (thermogenic) has different properties and can be differentiated. But there are many pathways to contamination, such as seismic faults and old unmapped wells, and many chemicals involved besides methane; families who have obtained settlements for polluted water have all been forced to sign non-disclosure agreements that protect the gas companies (therefore their damages are undocumented). And thermogenic (fracking related) gas has been documented in polluted wells in Wyoming.

Industry claim: The small amount of chemicals used to frack a typical well constitute less than 1% of the volume of water injected. These chemicals aren’t dangerous, many of them can be found under the typical kitchen sink.
FACT: Let’s see, I’ve got chlorine bleach, ammonia, and sodium hydroxide under my kitchen sink; any one of which alone can be deadly, and in combination, even more so. The typical fracking operation uses 5-million gallons of water; 1% of that is 50,000 gallons of chemicals, some of them innocuous, but others extremely dangerous, such as toluene, benzene, ethylbenzene, and 2-butoxyethanol.

Industry claim: Wellbores are made of steel, and cased with concrete; the chemicals can’t escape into groundwater.
FACT: Six percent of wellbore casings will fail immediately.Over a 30-year period, the chances of wellbore failure are 50 percent. These figures are based on the drilling industry’s own data.

Industry claim: Fracking and natural gas will allow the United States to achieve energy independence.
FACT: False. In November 2008, based on drilling results, Professor and Geologist Terry Engelder of the University of Pennsylvania estimated the amount of natural gas in the Marcellus Shale to be 363 trillion cubic feet (10.3 trillion cubic metres) of recoverable resource, which would be enough to supply U.S. consumption for at least fourteen years.
Based on actual well production, that estimate was reduced by 66% by the U.S. Dept. of Energy in 2012. That changes the amount of natural gas recoverable from the Marcellus Shale to a 4.76 year supply. Even if we count all the shale-gas reserves in the United States—the Andarko-Woodford, Bakken, Barnett, Utica, etc., there is only enough recoverable resource to last perhaps 50 years, and we won’t be using it here; first, the price for natural gas is much higher overseas, and second, we haven’t the widespread natural gas infrastructure necessary to begin switching to CNG vehicles. With gas prices low, there’s no reason to build that infrastructure, either, especially when profits from exports are guaranteed.
In aggregate, this is no reason to put our water supplies at extreme risk.

Industry claim: Fracking has already reduced carbon emissions by 14%.
FACT: False. When it’s stated that carbon emissions have been reduced, the measurements are of CO2 only (methane is carbon-based, too). Reduced CO2 is not "reduced carbon emissions". Reduced productivity due to the stagnant economy, reduced driving, increased use of LEVs and PZEVs, solar, hydro, and geothermal energy have had some impact, as well. In any case, there is insufficient data to state that reduced carbon emissions (if any) are due to fracking. Remember, methane is 21 times more potent as a greenhouse gas than carbon dioxide, so the net effect is likely to be accelerated climate change. The concentration of methane in the Earth’s atmosphere in 1998, expressed as a mole fraction, was 1745 nmol/mol (parts per billion, ppb), up from 700 nmol/mol in 1750. By 2010, however, global methane levels, which had stayed mostly flat since 1998, had risen to 1850 nmol/mol.