Last summer Dustin complained of chest pains to his doctor after a long stint working on a hydraulic fracking site in south Texas. Dustin had also developed “frack hack,” which his pulmonologist attributes to his exposure to fracking chemicals. 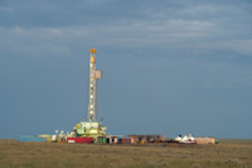 Dustin, age 36, explains how he is exposed to hydraulic fracturing chemicals. “Typically when we run a frack [fracking operation] on the pad [where the wellhead is situated], we are standing on a bunch of water tanks on the pad. The company I work for transfers water to the pad. Next to these water tanks are a couple of big acid tanks. In front of us are the sand movers - they have a big truck called the Sand King, which moves sand to another truck. Basically a bunch of sand, water and chemicals are mixed together and we are exposed to all of it; nothing is contained.”

Shockingly, Dustin and his co-workers do not wear any safety gear. It sounds eerily like the asbestos industry decades ago. Like asbestos fibers, some of the fracking chemicals are airborne. “We can see this mixture in the air we are breathing,” says Dustin. “It’s just one of those things - maybe I am stupid but nobody in the company has worn a dust mask or anything. Nobody has told us that the materials we are breathing can cause health issues. There is no respiratory training with my company. The only training we get is about H2S [Hydrogen sulfide], which is a deadly gas that can escape the wellhead. If you breathe in H2S, it takes all the oxygen out of your body; you pass out and die. Everyone I work with has been pretty lucky, but they said in training that H2S accidents have happened. The company is supposed to give us H2S monitors but I have never been given one. A few of my co-workers have them but I guess they are in short supply because they are really expensive.”

Dustin’s frack hack didn’t go away and the chest pains worsened so his doctor ran some tests and determined he has asthma, which surprised him. “I have never had asthma and no one in my family has it. Up until this point, I have been in excellent shape. I was a runner up until a few months ago, when it got harder and harder to breathe.” Dustin discussed his fracking concerns with his doctor. “She said I probably had asthma all my life but didn’t notice it, and I asked her if it could be irritant-related. Affirmative.”

Next up, Dustin saw a pulmonologist, who confirmed bronchial asthma. “I brought him pictures of the fracking site where I work,” says Dustin. “He said, ‘Yes, that is probably where you got it,’ but he won’t put it in writing.

“I’ve been working for this company for almost a year and the pay is pretty good, but I am going to find work that won’t damage my health any further. This company and most any company involved in the fracking business has a high turnover rate due to injury, but no one has actually been fracking every day for an entire year like I have, so many don’t have frack hack like me. Most people go on the pad for a few weeks and come back for a few days. I have worked sometimes 30 days without a day off (the overtime is nice), but not at the expense of my lungs.

“When I found out about these lung issues, I started looking online. After I found out about asthma, I read about the dangers of fracking and silicosis in particular. Apparently you can get silicosis within a year after being exposed, from breathing in a lot of sand. That can be deadly.

“I told my employers about my frack hack and silicosis, and they took me off the pad almost four weeks ago. I am working at the shop - we also rent water pumps. I transport them to different sites and refurbish them at the shop, so now I am breathing in spray paint every day. They still haven’t issued safety gear and breathing apparatus. My doctor wrote to them - he said that safety precautions are advised. To this day, there is no training set up, but if you want, you can buy your own respirator. There are no spares around here.

“I tried to put on a respirator but I had difficulty breathing, so I can’t even wear one - isn’t that ironic? I think my days working on the pad are over, unless my lungs get better and I can wear a respirator. I was reading the OSHA website, which clearly states that it is against the law for anyone to work in this environment without any safety equipment - fitted masks to keep sand out - or without proper training. These are really big violations and I don’t think my company realizes it. Or, like the asbestos makers, they choose to ignore it. They have an OSHA poster on the wall but I don’t think they read it.

“I read studies online that have been done in fracking areas. Some sand levels are so high that not even a respirator is safe. And they looked into the chemicals used that cause all kinds of weird stuff. There is actually radioactive material that comes out of the ground after fracking, called back flow. And it causes asthma. There has been a 25 percent increase in asthma in children in fracking communities.

“I am at a loss; I just don’t know what to do. Maybe a fracking attorney can pressure my company, and other companies, to at least issue us safety gear. And maybe a fracking lawsuit will make them take notice.”

For many years there has been an ongoing debate about whether hydrofracking is making people sick. A proposed study involving the Geisinger system wants to use its huge database of electronic health records to help researchers look at air pollutants associated with gas drilling, and how they are affecting people with asthma and other lung problems. “About six percent of people in the US have asthma,” says Dr. Paul Simonelli, the Geisinger system’s director of thoracic medicine, “so we’re talking about an enormous number of people who are potentially at risk to have their conditions worsened by these exposures.”

Posted by
Elaine W.
on February 24, 2013
I have grounds for a Rico lawsuit concerning exposures to lead soldering which I proved! When will someone with some integrity step forward to take this on?
Posted by
Michael Lasher
on February 20, 2013
Well water contanimation is so vile that you can't imagine the scope and burden until you are victimized. My well was drilled c.1973, have lived in this home for nearly 28 years . Feb.19,2013 first report of minor earthquake in Williamsport,Pa. directly in marcellus shale region. I would respectfully request more well water info re: fracking.
Posted by
Kim Feil
on February 19, 2013
It will be more employees that post this extremely important information on the internet that will be the real heros because the media, the medical community, the politicians and our law makers have failed the workers and the fenceline breathers and all those downwind from fracking and all the other dangerous phases of mining for fossil fuels so the rich get richer and the rest get sicker. i live, breathe, and blog in BarnettShaleHell Arlington Gasland Texas.