When John Slesinger’s tap water was too salty to drink he started asking the neighbors if they too had problems. Like many people who rely on well water, John was not aware that hydraulic fracking had contaminated his groundwater. “It took me a long time to discover that this gas well existed,” says John. “It got so bad we couldn’t even shower with this water—it was only used to flush toilets.” 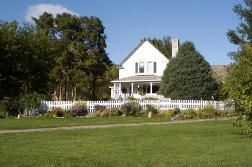 John took a water sample to a private lab for analysis. It would take a week or so to get the results. In the meantime--on Christmas Eve 2009--John bought a few barrels of water and plumbed one of them into his house. (His family uses about 300 gallons of water per week—all of which comes from their well--and an average barrel holds about 60 gallons—he hauled a lot of water.)

The lab results came back and John was shocked, to say the least. “The lab technician told me that, after more than 20 years of water testing, mine was the worst drinking water sample she had ever seen,” John says. “She explained that the total dissolved solids (TDS) test is an indicator of whether you have anything in your water but you have to identify what is causing the level to be high.”

The Safe Drinking Water Act identifies the TDS upper limit of 500 parts per million. John says that his test results read 3,590 parts per million. “The technician said it looks like I have gas well contaminant in my water. That’s when I checked with my neighbors to see if they had water contamination.”

To put things into perspective, John’s home--that has been in his family for over 35 years--sits on one acre in a very rural area. If there are no leaves on the trees, he can barely see their closest neighbor.

“One of my neighbors told me about a gas well over the hill,” John explains. “I never saw their equipment—I didn’t even know it was there because they built it out of my view. But I did find out who did the fracking: T&F Exploration has dragged me through the mud for the past two years.

"I contacted the T&F foreman by phone. ‘I wonder if there is something wrong with our cement,’ he said. I figured they would fix whatever was wrong, simple as that.” But it was anything but simple. Unfortunately, John didn’t record that conversation.

Next up, John contacted the Dept of Environmental Protection, the agency responsible for permits and monitoring of gas wells, among other things, but was told that his water contamination did not meet the criteria of gas well pollution. The agency also told him that it would “eventually clear up”. John says he called again but the agency refused to talk further.

(Many people who rely on well water may be unaware that they have contaminated well water. The CDC says that individual water system owners are responsible to ensure their water is safe to drink and they are responsible for well testing.)

Then John reached out to the media. In July 2010 he contacted The Tribune Democrat. At that time, T&F Exploration of Pittsburgh had not completed the gas well’s underground work. The newspaper said that T&F Exploration spokesman Bill Straslicka would not agree to an interview but he responded by e-mail.

“While we empathize with Mr. Slesinger's water quality problem, we can assure you that we take every precaution possible to protect the fresh water aquifers that we drill through and that we are in full compliance with DEP regulations in all regards at our well location in Adams Township.”

John finally found help with attorneys at The School of Law at University of Pittsburgh. “It took a long time but they have been able to identify other evidence that would support the fact that my contaminated water came from the gas well,” he says. “They filed a lawsuit that has now been stalled for over a year. They have helped me so much; they have a gas well expert with 25 years experience. And in the discovery phase, my attorney found documentation by a DEP field investigator who signed off on a T&F cementing procedure for the casings, except that it didn’t go according to plan after DEP approval.”

But John’s attorney is not a litigator.

More HYDRAULIC FRACTURING News
“T&F has a personal injury attorney so I am looking for someone to take my case,” John says. “There is so much evidence documented on this case so whoever takes it on will be well equipped.

"I read the LawyersandSettlments interview with your fracking attorney with great interest and how he was able to get these families affected by hydrofracking a settlement.

"He found for these families a settlement because their case was never investigated properly and it took so long that it caused them undue hardship. I know that one plaintiff was unhappy because he had to forfeit his house but I want to move away from here. I’m thinking that your lawyer’s approach might work for me.”