Residents of Dimock, a tiny community in northeastern Pennsylvania whose residents sued Cabot Oil & Gas Corporation over alleged hydraulic fracturing water contamination, have reportedly agreed to a settlement. Names on the proposed settlement document were redacted and the terms, and amounts of the proposed payouts have not been disclosed. 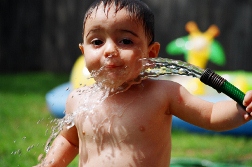 The hydraulic fracking dispute between the tiny community (population 1,497 as of 2010) and the oil and gas giant has been likened to a David v. Goliath battle over the alleged impact of fracking to wells in the township.

Fracking has become the slang term for the process of drilling, and then injecting chemicals under intense pressure intended to fracture underground shale and release previously trapped stores of methane and natural gas. The process has been a boon for gas exploration companies, but a headache for homeowners who claim their well water has been contaminated from fracking chemicals migrating, and seeping into their wells.

You Tube has been rife with images of homeowners near various hydrofracking sites, running their taps and lighting the escaping water on fire with a lighter.

According to the Associated Press (AP, 8/16/12) the residents of Dimock took Cabot to court in 2009 over alleged contamination to their wells from hydraulic fracturing chemicals, and a resulting decrease in property values. Cabot denied responsibility, although the company provided bottled and other sources of potable water to residents until environmental regulators in the state of Pennsylvania concluded Cabot had fulfilled its obligations to the residents, and the company halted water deliveries.

Still, state regulators had determined that Cabot had, indeed contaminated the underground aquifer running beneath homes located along the length of Carter Road in Dimock Township with explosive levels of methane. More recently, according to the AP report, the aquifer was tested by the Environmental Protection Agency (EPA), which concluded the water was safe. The residents disputed the finding of the EPA fracking report.

How the allegedly contaminated wells are to be cleaned, re-drilled or other sources of potable water provided was not reported.

Meanwhile, the issue of hydraulic fracturing contamination continues to be hotly debated.

More HYDRAULIC FRACTURING News
And now an insurance issue has been raised. According to the Arkansas Democrat-Gazette (7/27/12), most policies do not cover damage to a homeowner's property deemed to have been caused, or triggered by water fracking. This includes any damage to a home's foundation or structure from vibrations moving through the ground at the behest of highly compressed air intended to fracture underground rock, or potential pollution to groundwater (and wells) from hydraulic fracturing chemicals.

"There are no new exclusions," said Robert Hartwig, president and economist at Insurance Information Institute, in comments published in the Democrat-Gazette, "and this doesn't in any way indicate that activity has been discovered to be riskier than it was [previously] thought to be."

Thus, the only recourse for a homeowner who suspects water or property damage from hydraulic fracking, may be through a lawsuit.