Fracking Lawsuits Filed by Those For and Against It 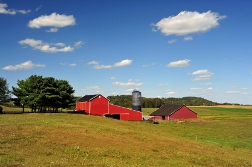 ABC News (3/21/13) reports that lawsuits have been filed to challenge laws that ban fracking. One lawsuit was reportedly filed by a dairy farmer, who says because of the ban, she is losing money that she could have made from wells planned for her acreage. The lawsuits allege that local regulations conflict with state regulations, making the local rules unenforceable. Many towns and cities in New York have either banned or limited fracking.

The issue is more pressing because a five-year moratorium on fracking (also known as hydraulic fracturing) is about to end.

According to CBS News (3/3/13), Governor Andrew Cuomo has delayed making a decision on allowing hydrofracking in New York State until results of a Pennsylvania health study are finalized, possibly delaying a decision by up to a year. The study, conducted by the Department of Environmental Conservation, was set to end in March.

People and organizations against fracking say they are concerned about the health risks associated with the process, as well as social and economic impacts.

More HYDRAULIC FRACTURING News
In Colorado, however, Governor John Hickenlooper has said the state will sue any municipality that bans hydraulic fracturing. He made that announcement despite an oil and gas well releasing approximately 84,000 gallons of oil-tainted fracking flowback water. According to The Coloradoan (2/20/13), the flowback leaked for 30 hours.

Meanwhile, USA Today (3/20/13) reports that environmentalists and oil and gas companies in Pittsburgh have reached an agreement on fracking standards. The agreement will see companies encouraged to submit to an independent review, and if they meet certain criteria, they will receive the endorsement of the Center for Sustainable Shale Development. Among the criteria are limits on methane emissions, burning off of unwanted gas, and rules about wastewater disposal.

Posted by
Kassi
on April 14, 2013
I'm not sure what fracking is or what the story is trying to get at but oil rigs have been on my mind for the past few days, so it's is a significant coincidence that I read about it here. I feel that oil Riggs are depleting the nature from their natural resources. The ground seems to be getting dryer. Granted, I live in Utah where it's desert, but come on, the trees in my back yard are thirsting to death because in my opinionated hypothesis, these Riggs are sucking too much grind water. Most everything should be electric. If that makes any sense, I hope it helps in whatever way possible, if not, oh well.