Is Fracking Linked to Earthquakes? 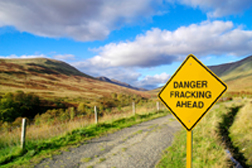 The concerns are serious enough that some regulators and geologists are now looking into the matter. According to the Los Angeles Times (3/12/14), a series of earthquakes in Ohio resulted in a nearby fracking site being shut down while investigators looked into whether the fracking may have caused the earthquakes.

The Columbus Dispatch (3/16/14) reports that Ohio experienced an average of two earthquakes that registered a magnitude of 2.0 or greater each year from 1950 to 2009. But from 2010 to 2014, the yearly average jumped to nine. Since 2010, fracking has become more widespread. Meanwhile the Times reports that the occurrence of small earthquakes in the past few years in certain parts of the US has increased 20 times.

Part of the problem, according to scientists, is when wastewater from fracking is sent back into the earth through injection wells to be held in underground caverns. A series of earthquakes near Youngstown was blamed on a fracking-waste injection well that was drilled on a fault line. The injection well reportedly dumped millions of gallons of waste into those caverns, but the well was shut down following the earthquakes, according to The Dispatch.

Lawsuits have been filed against fracking companies, alleging their activities resulted in earthquakes that caused home and property damage, Courthouse News Service (2/19/14) reports. Two lawsuits were filed in Arkansas by families who say fracking in the area caused a series of earthquakes in 2010 and 2011. The lawsuits allege scientists knew since the late 1960s about the risks associated with disposal wells, but the companies went ahead and used injection wells to dispose of wastewater. As a result, the plaintiffs claim they suffered property damage and a loss of property value.