Usually it’s the attorney advocating for his client in a lawsuit. This time, however, the attorney is the plaintiff in a massive Hurricane Sandy lawsuit that seeks $500 million in damages and seeks to have the defendant, Consolidated Edison (Con Edison) put out of business for good. After losing his power for five days in 2011 following Hurricane Irene, the Staten Island lawyer was without power for 17 days following Sandy. 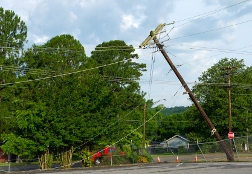 According to the Staten Island Advance (1/16/13), Robert Prignoli hopes to elevate his Hurricane Sandy power outage lawsuit to class action status on behalf of anyone who lost power for a sustained period of time as the result of the horrific storm. The plaintiff also holds that Con Edison failed to properly prepare for the onset of Hurricane Sandy, and indeed has dropped the ball with regard to ongoing infrastructure improvements over a sustained period of time.

Prignoli’s Hurricane Sandy Utility lawsuit claims that he was even told by Con Edison workers themselves that the utility’s infrastructure was “old and decrepit,” and that the Utility failed to spend any meaningful dollars to fix up the grid and make it more reliable.

The plaintiff claims he has experienced power outages every year since he moved into his Huguenot home in 2004. He also alleges his power is the first to go and the last to be restored. Prignoli claims in his lawsuit that power to his home??"which was not damaged in the windstorm and subsequent flood??"was off for 17 days, even though most of his neighbors had their power restored after only a few days.

The neighborhood in which the plaintiff lives has buried power lines, and thus nothing overhead to be affected by high winds, snow buildup or ice accumulation.

In his lawsuit, Prignoli notes that Con Edison required a formal inspection by the city Buildings department as his home is located in the Zone A evacuation area. The inspection finally took place and the plaintiff’s home was cleared November 5. However, according to the report, there was yet another delay. The utility, according to the court documents, informed the plaintiff that before it could restore power to his home, the Utility required a certification from a licensed electrician avowing that no repairs were required. Court documents show the certification was delivered to the Utility November 12 of last year.

The plaintiff says it took the Utility several days beyond delivery of the certification, for his power to be restored.

More HURRICANE SANDY News
Most of his neighbors saw their power restored October 31st??"two days after the storm. "There's still people without power today and we're going to pursue it," Prignoli said January 15 in a telephone interview with the Staten Island Advance. "I don't believe Con Edison properly prepared for the storm, (and) I don't think they invested enough in capital improvements over the years."

The plaintiff, who lives on Nicolosi Loop near Raritan Bay, alleges gross negligence in his Hurricane Sandy Lawsuit. “In any severe event,” the plaintiff alleges in court documents, “we lose power first and have it restored last.” Prignoli notes he was given six different dates for power restoration by Con Edison, before finally seeing his power restored after two weeks. He’s pushing to have Con Edison shut down, and the lights turned out at the historic public utility for good.

If you or a loved one have suffered losses in this case, please click the link below and your complaint will be sent to an environmental lawyer who may evaluate your Hurricane Sandy claim at no cost or obligation.
Request Legal Help Now