Although they are not covered in the media as frequently as big insurance companies, home warranty companies have started to get the attention of customers and clients who say these companies also practice bad faith insurance. Among the tactics allegedly used by insurance companies—some of which have faced a home warranty lawsuit or two—are unfair denials of legitimate claims, refusal to pay for repairs that should be covered and instructing repair technicians to use the cheapest repair possible. 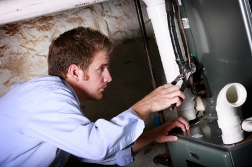 Other complaints against home warranty companies are that they deny the repair based on failure to maintain the broken appliance, even when no initial inspection of the appliance was conducted. One home warranty company customer writes that he was told his oven was not repairable because the part was not available. Leonard [real name withheld] says his home warranty company clearly stated on the website that if an item could not be fixed, it would be replaced. Furthermore, an agent reportedly told him the same thing, but Leonard says he was told under his policy he would be given a check to help with the replacement, but not an actual replacement.

Meanwhile, another customer writes that her home warranty company refuses to replace a furnace because of rust. According to Lynda [real name withheld], a furnace repairman told her that her furnace was old and needed replacing, going so far as to show her the rust on the unit. But Lynda says she was told the rust had nothing to do with her furnace malfunctioning. Her home warranty company, however, told her it would not pay for replacement of the unit because her policy did not cover damage due to rust.

More HOME WARRANTY INSURANCE News
Despite Lynda arguing with the company and telling them the rust was just from age and had nothing to do with the unit breaking down, the company continued to refuse to replace the furnace. "We have been cheated and treated bad throughout this whole ordeal, not to mention that member services wouldn't even let me cancel without the threat of being billed further…In the end (as it appears), we were treated badly and even rudely, I would say, by the home warranty representatives."

Unfortunately, Lynda and Leonard's complaints still seem to fall on deaf ears, and their situations are apparently all too common. Consumers and customers pay in good faith to ensure their appliances and various systems in their homes are protected in case of breakdown, but some home warranty companies refuse to honor their policies.

Posted by
Mary Starks
on December 17, 2012
Same with the washing machine, there will always be rust from water. If you don't need them often, I would not invest. I am terminating mine as the fee for service went up and I used them 2 times in the past 2 years. They said the first was not covered and had to pay for sevice and full pay for the service of the company. If you never get to talk with anyone at the site to confirm if covered, they claim they don't know till someone gets to the house.