Maybe it is because his parents smuggled him out of Afghanistan in a suitcase when he was two and half years old, that personal injury and litigation lawyer Ilyas Akbari has such a keen sense of what it means to be pushed to the limits of human endurance by circumstances beyond your control.

"I have been out of law school for five years now. The first couple of years I was doing defense work, I was on the other side, and if it was about the money I would have stayed on that side. But, I couldn't do it," he says in a calm, clear voice. 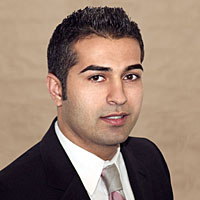 That daring and dangerous run from Afghanistan led first to Pakistan, then to Germany and finally landed the Akbari family in the United States in 1980 as refugees from a country where war and political chaos still reign.

"Have you ever heard of a book called the Kite Runner?" Asks a relaxed and confident 31-year-old Ilyas Akbari from his office in Los Angeles with the high profile California law firm of Baum, Hedlund, Aristei, & Goldman. "Well, there are a lot of similarities to my family," says Akbari.

If it was difficult for the Akbari family to cope with a new life in America, you would never know it, given what the boy who left Afghanistan in a suitcase 29 years ago has achieved already. He earned a degree in bioengineering from the University of California (San Diego) in 2000 and three years later, he graduated from the Southwestern University School of Law.

The combination of legal and scientific training has proven potent for Akbari.
"I think it is pretty invaluable for me," he says, "It gives me the big picture. First of all, I can understand the scientific literature. It just comes a lot easier for me"

Baum, Hedlund, Aristei & Goldman have been representing victims of defective drugs for more than 20 years.

Akbari is part of a litigation team at the firm currently representing clients injured by contaminated lots of the drug heparin, an anticoagulant and blood thinner used in surgeries, dialysis, blood transfusions, and as a treatment for arterial embolism.

"A lot of people right now have not associated their injuries with heparin," says Akbari "and I think a lot of people who have taken heparin and experienced bad reactions from contaminated batches, aren't aware that they might have been given a contaminated dose of heparin."

Some of the adverse effects are nausea, vomiting and diarrhea, but a more serious complication is a sudden drop in blood pressure, that can be fatal. Akbari says the firm has dozens of clients who have had negative responses to heparin "including some deaths."

The common thread in all the cases is Scientific Protein Laboratories, LLC (SPL), a company hired by Baxter Healthcare Corporation and other drug companies, to supply the main active ingredient.

"The thing that is common (to all the contaminated lots) is Scientific Protein Laboratories, SPL," says Akbari. "They are a US company that manufacturers the raw material for heparin in China."

According to the case being prepared by Baum, Hedlund, Aristei & Goldman, heparin's active ingredient supplied to manufacturers was either "diluted or substituted with the contaminant over-sulfated condroitin," Akbari says.

Baxter and others have since recalled the contaminated lots, but as many as 130 people in the US are believed to have died from receiving defective heparin.

"These companies outsourced to a lab in China to get their raw materials and this is what happened. It is upsetting that some companies put profit before safety," he says.

LAS: When is it time to call a personal injury lawyer?

More HEPARIN News
Ilyas Akbari: I think if they can associate their illness with a drug or a procedure, I think it would be worth it to contact a lawyer. We can advise them to ask their doctor which lot of heparin they took and we can find out if it was one of the batches that was recalled.

LAS: At what stage is this case right now?

Ilyas Akbari: Our firm is on the plaintiffs' steering committee, a leadership organization in the multidistrict litigation that consolidates all federal heparin cases in Toledo, Ohio.
We are working to determine the chain of distribution so that we can identify who may have been given contaminated heparin.

Akbari has been named to the Southern California Super Lawyers list of Rising Stars in 2007 and again in 2008. Akbari was also a Founding Vice President of the International Society of Pharmaceutical Engineers. His main areas of practice are Pharmaceutical Injuries and Aviation. He is currently considering getting a pilot's license.

Posted by
Khurram Zaki Khan
on February 3, 2013
Dear Mr. Akbari:
I am the Khurram Zaki Khan CEO of Pakistan's leading CRO/SMO Dimension Research. We have recently started a web based AE/SAE repodting net work www.PhVNet.com to create a place fro reporting these event. As you might know that in recetn path more than 250 people has died due to SAEs in Lahore due to contamination of Fansidar in their heart medicne "Isotab" manufactured by Efroze chemical. Then in another case 30+ people died in Punjab due to a cough syrup which later found to be due to contaminated API imported from India. Unfortunately there are no National PhV Net work hence we have started one on volunatry basis. There are also no lawyers trained enough to assist the victims. What I like to know is the possibility of collabroating with you/your company in case there are some SAEs/AEs related claims on multinational / US /EU based companies. Please let me know your contact details so I could contact you directly if you are interested.
Posted by
Gladys Stafford
on January 23, 2012
My father had surgery that included the administration of Heprin which caused his death. The surgery occured at St. Joseph's Hospital in Tampa, Florida and it has been so difficult and disturbing to know that a physician and hospital holds no responsibility or accountability. I hope through your professional knowledge and service I can preclude this irresponsibility from impacting others.