Harold's wife recently passed away and he believes she would be alive today, even though she had treatable cancer, if she wasn't given Heparin on a regular basis; chances are, some of it was likely contaminated.

"My wife was given Heparin regularly, every time she had chemotherapy," says Harold.
"But last winter she was very weak and the doctor said her hemoglobin was low so she had a blood transfusion. She got some energy back but within a few weeks, it went down again. She was like this for months and she developed unbearable pains along with nausea and diarrhea. We couldn't figure out what was wrong. Her blood pressure went through the roof, over 200. 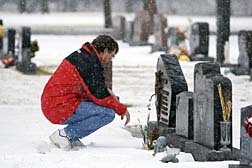 She was on so many meds, trying to stay comfy and alive. But she just got worse. That is when the doctor discovered her platelets were too low so she couldn't have exploratory surgery, she wouldn't be able to clot. They noticed her kidneys were failing and her heart and lungs were compromised. On January 23, the same day there was a national Heparin recall, the doctors told her she had a blood infection that would probably kill her. They likened it to the E. coli virus.

There was a slim chance they could correct it by plasma exchanges so she had all her blood taken out and new plasma replaced, every day over two weeks. It was an ordeal. But they gave up and sent her home with hospice care.

She was with us for another 10 days. My wife was only 66 when she died. Nobody mentioned Heparin. It just seemed kind of fishy to me--that the recall announcement happened the same day they told her about the blood infection.

I have statements from the hospital indicating that she was given Heparin on many occasions. She first got cancer in 2003 so she had Heparin over a period of five years. Her cancer was moderate and she was even taken off treatment a few times because it was small and manageable. I know the cancer didn't kill her. Everybody knows her cancer wasn't that bad, definitely not bad enough to kill her."

At this point, Harold couldn't talk anymore—the death of his wife is too painful.

In written testimony, Dr. Janet Woodcock, director of the Food and Drug Administration's drug center, told the House Subcommittee on Oversight and Investigations that the "F.D.A.'s working hypothesis is that this was intentional contamination, but this is not yet proven."

The Times likens the heparin contamination to the Tylenol poisoning in 1982, when seven people in the Chicago area died after taking cyanide-laced Tylenol.

More HEPARIN News
The F.D.A. has identified Changzhou SPL, a Chinese subsidiary of Scientific Protein Laboratories, as the source of the contaminated heparin. Meanwhile, Chinese officials dispute the claim that contamination came from a Chinese plant, and say they should have the right to inspect US drug plants if the FDA inspects theirs.

In February, the FDA inspected the plant and subsequently banned all exports to the US. The manufacturer, Baxter International, bought heparin ingredients from the Chinese plant from 2004 through 2008 but did not inspect the facility until September 2007. How many lives were lost due to this grave error? Although contaminated Heparin was recalled, at least 149 people died from allergic reactions and hundreds more have been sickened by the drug. The FDA's investigation of tainted Heparin is ongoing.