Norma says she is lucky to be alive. She went into anaphylactic shock after being injected with the anticoagulant Heparin, which naturally led Norma—and her doctor-- to believe the drug was contaminated.

Norma's ordeal first started in December 2007 when she was rushed to ER with severe pains and diagnosed with kidney stones. "It passed but then I had a CAT Scan and the doctor found a larger one," says Norma, "so they decided to crush it with laser treatment." She had the procedure but two days later Norma was back in ER—and she barely made it out alive. 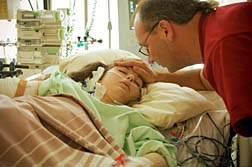 "The kidney stone hadn't been small enough to pass and it caused a urine infection," Norma explains. "On December 26 I went into a coma and didn't wake up until January 27—one whole month had passed without me knowing. While I was in the coma, I had two more laser therapies and had two stents implanted to make sure the kidney stones would pass. During this month, while I was treated in ICU for the infection, my body functions were improving—then I had a heart attack.

That is when I was given Heparin, to thin my blood and prevent my heart from working so hard. As soon as they gave me Heparin I went into anaphylactic shock and the doctor told my daughter that Heparin caused it. We are assuming it was contaminated.
When you wake up in ICU, you don't expect to be given a drug that can kill you.

When I woke up from the coma, I found out that I couldn't walk—my muscles had suffered so much. By the time my daughter saw me, my feet and hands had already turned black—it is a miracle that I am still alive. The doctors told my daughter I wasn't expected to live through the night. I was on a respirator—the whole nine yards. And the physical therapist said I was a miracle because I kept my mind. I could be a vegetable today.

I was sent to a nursing home for rehab. My whole life has been devastated—everything I did before I cannot do now. I can walk but not any distance and I have already fallen a few times. Before this happened I operated a home business then all of a sudden, I wake up 30 days later and can barely go to the bathroom: it has been devastating, to say the least.

More HEPARIN News
We didn't realize what had happened until my daughter read about Heparin online. 'Mother, everything they say about this drug happened to you,' she told me. The sad part is that we depend on doctors to help us but when they are given defective drugs it must be so frustrating for them, to be putting their patients' lives at risk.

On the bright side, I was going to school and couldn't continue after all this happened. This semester I got registered in a school here in Kentucky and I am waiting for my books to arrive today—I am 64 years old and I'm planning on an associate degree in office technology. I do feel better but my hearing is impaired permanently and I am bordering on being profoundly deaf. It could have been from the antibiotics that I was given but it all stems from Heparin."