"My husband was given Heparin in the hospital and he died shortly afterward," says Rhona Davis. "I filed a lawsuit some time ago but Louisiana has Napoleonic laws. However, since Dennis Quaid's two-week-old twins were recently in the news (they were also given a massive dose of Heparin), something might get done."

John Davis had chest pains and he was diagnosed with leukemia. He needed a bone marrow transplant and had a donor: his sister was ready, willing and able.

"John was admitted to hospital and underwent a few weeks of chemo and radiation to destroy his bone marrow," says Rhona. "He was doing well and had the transplant after total-body irradiation--the same day. 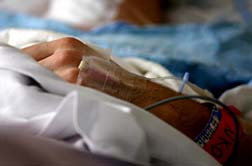 "He had now been in the hospital, in a private room, for two weeks--everything had to be sterile. John developed a fever and he called me—I just had to walk from one building to the next (the hospital had apartments for families of transplant patients). By the time I got there, he was walking around and talking but complaining about chest pain. His oncologist had him on antibiotics because he probably had pneumonia-- which is common. That night there wasn't an oncologist at the hospital.

The staff that night couldn't find anything else wrong with him but a resident cardiologist thought he might have an embolus. I am a registered nurse and I saw no indication that it was an embolus—John didn't have those symptoms. When you have pneumonia, it hurts when you breathe and that's what he had.

But instead of calling the oncologist, the resident cardiologist ordered 10,000 units of Heparin IV push—which means that John got it all at one time. I told the doctor that he couldn't have Heparin because his platelet count was below 1000--extremely low. I showed him John's chart and labwork. The doctor ignored me.

After the Heparin was given, the resident cardiologist called his chief resident and told him to come down here, now. They attempted to intubate him; they didn't give him any meds to relax or sedate him; instead they were yelling at him to cooperate and stop fighting them. Your body won't do that—you can't put a tube down someone's throat without the patient normally fighting back. One of the respiratory therapists was actually sitting on his chest to try and get him to be still and cooperate.

They attempted three times to get the tube down his throat, unsuccessfully. Not long after that, the oncologist came into the room, assessed the situation and said 'Call anesthesia stat and get her out of here (me)'. Anesthesia got there right away but by then John was bleeding and getting very weak. His blood pressure dropped and he became unconscious. I was standing in the hallway at this point so all I know is what I read from his medical charts (and what I kept for a lawsuit).

Around 8am I called family and told them to come over, including the staff at the TV station where he worked (they were also filming a documentary on his illness). A lot of people were praying for him. The oncologist sat with me and told me what happened. I asked if I could see John but he said no, there was blood everywhere and they were still cleaning up. 'As soon as they clean up, we can go in and see him but his lungs are full of blood,' he told me.

But I kept thinking that he would be OK in a few days because the transplant went so well. Up until he had the Heparin, he was fine and he would have recovered. "They have undone everything I did for him,' said the oncologist.

John had his 52nd birthday in the hospital. He passed away December 5th, 1998.

More News
As well as the incident with Dennis Quaid's twins, there have been several instances of infants dying after being given Heparin— due to the labels on the drug. One vial's label says "use for IV only" and the other vial says 'adult dosage-Heparin'. Each vial had different caps and it was written clearly on the bottle but the wrong Heparin was given. One family was compensated $250,000 for their child's death. Quaid said he wasn't interested in the money but wanted people to know what happened. If he didn't make this public, maybe more deaths would have occurred.

Several doctors I spoke with suggested that I see an attorney about John's death—they think that Heparin likely killed him. Although John died eight years ago, I want everyone to know about this dangerous drug. Heparin took his right to life away. He had so much to offer his family and the community. It is tragic."