Maureen and Ron Tujague of Pleasanton, California are suing Baxter Healthcare Corporation, one of the makers of contaminated heparin, and Scientific Protein Laboratories, LLC (SPL), the supplier of contaminated heparin's active ingredient, because the contaminated heparin used by Mrs. Tujague during a dialysis treatment caused a sudden drop in blood pressure that led to heart failure, cardiac damage and a debilitating affect to her overall health. 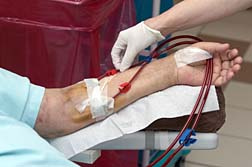 Mrs. Tujague, a retired nurse, was diagnosed with kidney failure in 2003 and had been undergoing dialysis treatment at home. Her health improved significantly and the Tujagues were looking forward to Maureen receivinga kidney transplant scheduled for February 15, 2008.

After receiving her daily dialysis treatment on January 28, 2008, in which she used Baxter's contaminated heparin, Maureen began to feel nauseous and had difficulty breathing. Her husband called 911 and in the ambulance, Maureen's heart stopped. In ICU her heart stopped three more times. Maureen was transferred to a rehabilitation facility where she spent two weeks before being released to home care on March 19, 2008, two months after her scheduled, and subsequently cancelled, kidney transplant. Today Maureen is bedridden and requires a wheelchair.

The Tujagues' lawsuit alleges that both Baxter and SPL knew, or should have known, that their China-based heparin products were contaminated and could potentially cause injury and death. Maureen's injuries could have been avoided had it not been for Baxter and SPL's cost-cutting negligence, according to the Tujugues' attorneys, Baum, Hedlund, Aristei & Goldman.

"It is clear that Baxter put the concern for its bottom line ahead of any concern for patients when it went to China for its heparin ingredients," stated Baum Hedlund attorney Roger Drake, a heparin injury lawyer licensed to practice in Ohio and California. "Baxter then failed to use the proper tests to identify this particular contaminant."

The Tujagues filed their case (Case No. 1:08-hc-60014-JGC) on June 23, 2008 in U.S. District Court in Toledo before Chief Judge James G. Carr. According to the lawsuit, this contaminant was intentionally introduced to dilute or substitute the active pharmaceutical ingredient for heparin for the purpose of profit and the attorneys allege that the conduct of
both Baxter and SPL regarding this issue was malicious, willful, reckless, wanton, fraudulent and contrary to legitimate business interests.

Baum Hedlund currently represents about two dozen heparin victims for both personal injuries and wrongful deaths caused by contaminated heparin manufactured by Baxter and others. A status conference before Judge Carr regarding the consolidated contaminated heparin cases is scheduled for July 9, 2008.

The firm has in the past litigated personal injury and wrongful death cases against Baxter Healthcare Corporation, one of the manufacturers of heparin. Considered at the time, one of the worst drug-related medical disasters in history, Baum Hedlund represented more than 100 families of hemophiliacs against several pharmaceutical companies, including Baxter, who were infected with the AIDS virus by their contaminated blood-derived medications.

If you or a loved one have suffered losses in this case, please click the link below and your complaint will be sent to a drugs & medical lawyer who may evaluate your Heparin Heart Failure claim at no cost or obligation.
Request Legal Help Now