The family of a Missouri man who died after suffering adverse reactions to contaminated Chinese Heparin is suing Tyco Healthcare, claiming that the company waited too long announce a recall of the drug.

And the death toll due to tainted Heparin continues to rise, because this case has not been accounted for by the U.S. Food and Drug Administration, which has been investigating 81 other deaths linked to the tainted blood thinner, says an attorney representing the family of Freddie James Williams Sr. 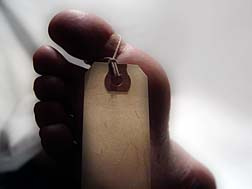 "Public and medical professionals need to be extremely cautious," says Jeffrey Killino, who is filing what appears to be the first wrongful death lawsuit against Tyco. "This case demonstrates that recalled Heparin is still in circulation, and there may be many more deaths throughout the country linked to it. The family was never notified of the recall, and one month after Freddie's death, his family still has numerous recalled syringes in their possession. No one has contacted them to ensure those syringes were discarded."

Williams, 67, of Neeleyville, Missouri died March 28 -- the same day Tyco Healthcare announced its recall. He suffered a series of severe allergic reactions to pre-filled syringes of contaminated Heparin distributed by the company. Williams, who was using Heparin lock flush syringes at home and in the hospital, experienced the most common adverse reactions: nausea, vomiting, excessive sweating and extremely low blood pressure.

The FDA is currently investigating other deaths of patients who suffered allergic reactions to Heparin between January 2007 and March 2008. On April 21, the FDA issued a warning letter to SPL, after finding numerous violations at the plant, including the failure to control its crude supplies, to test for impurities, to investigate the cause of failed lots and for manufacturing with unclean tanks containing unidentified materials.

The problems began to surface in late November, when the Missouri Department of Health and Senior Services began to tally an outbreak of acute allergic reactions among eight adult and pediatric hemodialysis patients. Missouri state health officials notified the U.S. Centers for Disease Control and Prevention on January 7, 2008. Almost immediately, in response to nationwide alert for similar cases, two dialysis supply companies reported having received of at least 50 similar allergic reactions among adult hemodialysis patients at dialysis facilities in several states.

A joint probe with the FDA determined that Heparin manufactured with crude Heparin - the active pharmaceutical ingredient (API) derived from pig intestines - supplied by Chinese plants was the culprit in a spate of deaths that now encompasses patients in the U.S. and at least nine other countries. The investigation discovered that the crude Heparin produced by SPL and Tech Pool, was contaminated with over-sulfated chondroitin sulfate, an over-the-counter dietary supplement used to ease joint pain. Traditional release tests did not detect it, because chondroitin sulfate, derived from animal cartilage, can mimic the API of Heparin.

The tainted Heparin linked to Mr. Williams' death was also supplied by SPL and Tech Pool, a joint venture with manufacturing and processing facilities in China. Baxter Healthcare Corporation, which sold Heparin containing the API provided by the same companies, began its recall on January 17. Baxter shut down its Heparin manufacturing operation in February and launched a second recall of its Heparin lock flush syringes on February 28. On March 20 and 21, American Health Packaging of Valley Forge, Penn., and B. Braun Medical, Inc. of Irvine, Ca., recalled their Heparin vials manufactured by Baxter.

Contaminated and potentially deadly Chinese imports, including tainted pet food, lead-coated children's toys, toxic toothpaste and defective light truck tires have been breaking news since last summer. Jeffrey Killino, of the Philadelphia law firm of Woloshin & Killino, has taken on deadly Chinese made products before. In July, Killino's death and injury lawsuit prompted a U.S. tire importer and distributor, Foreign Tire Sales, to recall 450,000 light truck tires made by the Hangzhou Zhongce Rubber Company. In August, Killino filed a class action on behalf of American consumers to compel Mattel to pay for the testing and treatment of children who might have been lead-poisoned by 1.5 million toxic toys produced in China.

If you or a loved one have suffered losses in this case, please click the link below and your complaint will be sent to a drugs & medical lawyer who may evaluate your Heparin Heart Failure claim at no cost or obligation.
Request Legal Help Now