LAWSUITS NEWS & LEGAL INFORMATION
Home Page >> News Articles >> Will the next patient be Safe from Heparin?

Will the next patient be Safe from Heparin?

Although Dorothy's husband had some major health issues before he was hospitalized and given Heparin, she says they were not life-threatening. She knows that he had an allergic reaction to multiple Heparin injections and never recovered. Lowell passed away on May 25, 2008.

"My husband was hospitalized when he had a pain pump inserted for chronic back pain," says Dorothy. "He had been going to a pain clinic (attached to the hospital) for a long time so they decided to try this device. After they insert the pump, they keep you in hospital under observation until the patient gets the correct dosage. Lowell had nerve problems. Although all his problems were back-related, he had other issues such as diabetes. Although he was 88 years old, I didn't expect him to get sick in the hospital—he only went in for a simple procedure. 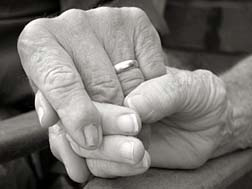 They gave him Heparin, even though they knew he was allergic to iodine dye. About 20 years ago Lowell had a test and he was given the iodine dye—the same thing happened; his symptoms were identical to those after he was given the Heparin. So I know he had an allergic reaction.

After getting one of the Heparin injections, his heart stopped and they had to revive him. Lowell was in hospital from March until the day he died. He had low blood pressure and they couldn't bring it back up no matter what they did; all his life he had perfect blood pressure. And he was very nauseated. He couldn't eat; he suffered shortness of breath and really bad diarrhea. He was always thirsty and very uncomfortable breathing.

I believe heparin contributed to his death. I insisted upon getting his medical reports daily but I only have them for the first month. It says he was given Heparin, the first injection starting March 24 and again a few days later.

More HEPARIN News
After I received the daily reports I realized there was an awful lot of medicines he was given and I didn't know what any of them were for. After Lowell passed away, I looked them up online and happened to come across Heparin: I was shocked.

For one thing we were never told he was given Heparin. Then again I had so much trouble getting the records, to be honest I think they were hiding the information from me. I asked a nurse for a list of meds but they couldn't give it to me. I had to go to the records office and it took so long; they wouldn't just hand them over. Finally they mailed his medical records to me this past June. That is when I decided to seek legal help.

I want to know if they have taken Heparin off the shelves or just the contaminated stuff. I think it is alright for them to try and save money by getting their supplies from China but they should consider the safety of patients first and foremost: I am worried about the next person: will they be safe?"