Son's Death Due to Heparin?

It's tragic when your child dies before you. Margaret's son was only 49 years old when he passed away in 2006; she believes Heparin hastened his death or possibly even caused it. "Michael was given a lot of Heparin injections and IV flushes in hospital, on many occasions," Margaret says.

"I don't know where to start," says Margaret, pausing to take a deep breath. She explains that it is very painful to talk about Michael's death. "He was taking aspirin in order to sleep at night," she begins. "His job was stressful and he was up early for work—Mike was an electrician. His health problems started when he had a bleeding ulcer and went to the doctor. He was told to stop the aspirin and of course that brought on blood clots. He had a stroke, not knowing the asprin was his blood thinner at that time. 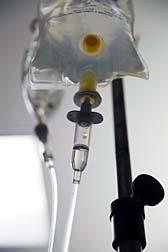 That was in 2001; he was put on Heparin in emergency right away, then Coumadin. The next week he had some mini strokes and went back to hospital. From that time on, he was on Heparin but he was also diabetic—he had been diabetic for 18 years. Between the stroke and diabetes, he was ill. And his job was getting so difficult because he was so exhausted that he was finally laid off. After you're an electrician for so long it's hard to get another career; it was hard because he couldn't even stand up for any length of time. And he had a financial burden because his medical insurer said, 'If you can mow a lawn, you can work'. (One of the neighbors saw him mowing but he could only stand for a few minutes at a time because of the blood clot in his leg.)

So within a few years he lost everything, including his house. The blood clot in his leg was breaking open all the time and in January 2006 he moved in with us. Whenever he went to hospital and got a CAT Scan he was given a Heparin flush IV. I know he was given many Heparin doses and often.

He went into hospital at Appleton in early May and they gave him more tests, again involving Heparin, this time as a blood thinner. I took him back at the end of May and he never left. While he was at St. Elizabeth's hospital, he developed a clot in his right hand and arm. Within 3 days, the doctors and specialists got together. Michael's arm and hand were turning black and his arm was twice as big, it was huge. Michael was flown by helicopter to Madison University hospital and within 5 hours, they had 11 specialists standing around his bed, deciding what to do with his arm and hand. They decided to operate that night: again he was given Heparin, not knowing he was allergic to it.

That is what they found out after the fact and the doctors told us. After that day they stopped Heparin.

He developed more clots and they put a filter in his groin to prevent clots from going into his lungs. His leg was enlarging at this point. Then he was put on dialysis (with his diabetes) and spent 75 days at Madison. In the meantime the signs on the walls of his bed said NO HEPARIN. On the chart, there was a sign that said No Heparin. On the medical report, the first line, it had the same command.

But in September 2006 he had a CAT Scan and he was given a Heparin flush. He told the technician that he was not supposed to have Heparin. 'Yes, we give it to everyone,' she said. We were waiting in his room for 3 hours. When he finally came up to his room, he was on a gurney and one of the hospital's PR people was following.

'Mum you can throw all caution to the wind, they just gave me Heparin,' Mike said.

More HEPARIN News
The PR person came into the room and they didn't know what to do—it was a big mistake. 'It's just a little bit of Heparin, it won't hurt,' she said. They tried to retrieve it from the pik but it was already in his system. They had to do something to make us feel good, I guess. That was mid-September and he was transferred back to St. Elizabeth's hospital.

He passed away October 13, 2006. Who knows if Heparin caused his death? If they can't get this drug off the market, who knows how many people have suffered and passed away and they don't know? Five days before he passed away, the doctor said he would never withstand another code blue; his body couldn't take any more.

We know about the babies given high doses of Heparin; we read about it and are more aware now thanks to the media, but what about all the people who were given this drug before the last Heparin recall? It is mind-boggling. And I found out that the symptoms may not show up right away so if you aren't thinking that Heparin could be the cause, you would never know or you might blame it on something else."