Mary L's mother, Elizabeth, was given heparin a couple of years ago. Mary believes her mother may have been exposed to the heparin contamination that sickened many people through heparin syringes. Now, all Mary can do is sit and watch her mom's health decline. 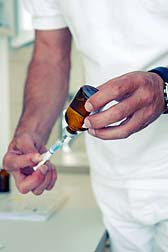 "She was given the heparin at the hospital when she went in," Mary says. "When she came out, she had blood clotting, strokes, high blood pressure and high cholesterol. You name it, she's got it. She has no appetite for food or drink. She didn't have these problems before she went in the hospital.

Heparin is used as a blood thinner to prevent the formation of clots that can cause heart attacks or strokes. It is also used in dialysis to enhance blood flow and is used to flush catheters. Heparin was recalled in 2008, after officials received reports of tainted heparin batches. Those batches were made with oversulphated chondroitin sulphate, a product that appears similar to heparin but is not heparin and can cause serious adverse reactions.

More HEPARIN News
Patients who were exposed to contaminated heparin suffered a variety of reactions from flu-like symptoms to anaphylactic shock. Some patients reportedly died after they were given contaminated heparin. The FDA says that it received 246 reports of death after heparin administration between January 1, 2007, and May 31, 2008. Of those, 238 were reported on or after January 1, 2008. For the sake of comparison, the FDA notes that it received 55 reports of heparin-related deaths in all of 2006, and those deaths involved a variety of underlying medical conditions.

Meanwhile, different batches of heparin, manufactured by AM2PAT in Raleigh, NC, were recalled when the plant they were manufactured in was found to be unsanitary. Approximately 160 illnesses and 4 deaths were linked to that heparin.

"Now, I just watch until my mom passes away," Mary says. "It's been a couple of years since she was in the hospital the first time. She has been with the hospice since March 2009. It won't be long—if she makes it until Friday, I'm lucky. She is actually 57 years old today. She just had a seizure and now I'm sitting with her, watching her. It's rough to sit and watch your mom die."