From a minor infection to Heparin Contamination

Robin's Dad stepped on a nail while renovating his home; it got infected and the infection spread to his artificial hip. "He wound up in hospital for 45 days and was given heparin injections as well a pic line [a form of intravenous access] with a saline-heparin mix," says Robin. "When he got home, we gave Dad even more heparin and nobody could figure out why he was so ill." Her Dad had all the signs of heparin contamination. 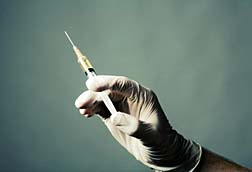 "Early this year, Dad woke up one morning and couldn't move so an ambulance took him to hospital and he was admitted," says Robin. "They took out his artificial hip and put in an antibiotic spacer, which got rid of the infection. The spacer stayed in his hip for 3 weeks then on top of that they put him on the antibiotic pic line with saline and heparin. Combined with the time in hospital and the time we gave his meds at home, Dad was on heparin for a few months.

The first week in hospital, he also had a morphine patch. Dad went into a comatose state and we thought it was the morphine but he got the patch off and stayed in this coma-like state—and he had a slew of other symptoms.

At one point my Mum yelled at the hospital personnel, 'What are you people doing'? Because as soon as they got him started on the heparin, it was like he was half-dead. He suffered allergic reactions right away: he couldn't eat, everything came straight back up. His skin looked jaundiced one minute, the next it was pale. He had really bad problems with balance and he got dizzy from just sitting up. Dad's vision was "off" and he kept getting headaches. He drifted in and out of consciousness—we were barely on the verge of keeping him with us; all we could do was talk with him; our family stayed with him 24/7.

Obviously these symptoms had nothing to do with his hip. The doctors kept saying that Dad didn't take care of his blood sugar (he is diabetic) but he was fine before this—his diabetes was always under control. I think they were looking at the easiest, most obvious diagnosis and not even thinking it could have been the heparin.

(My Mum passed away 10 days after Dad was hospitalized--she was perfectly healthy up until then. She went home from the hospital one evening and her heart stopped in the middle of the night—we think she had a heart attack but we're not sure…)

All of us kids finally rallied together and got Dad home; they were going to ship him to a VA hospital but we wouldn't let them.

About 8 months after Dad came home I was watching TV and saw an ad for heparin, listing all the side effects. It mentioned tainted heparin coming from China. I still have a couple of vials left at Dad's house that I am saving—I want to give them to the lawyers so they can check the batch, to see if the heparin we gave Dad was part of the recall. He had vials of heparin from the VA hospital and more from the hospital here in town, where he was admitted.

More HEPARIN News
Dad is finally getting better but he had these symptoms up until we quit giving him antibiotics through the pic line. And the pic line was flushed with heparin. The doctor had ordered that he go off the antibiotics because his infection cleared up but he was still suffering these symptoms that we believe now were side effects from contaminated heparin: soon after he was taken off the pic line, the symptoms disappeared—what a coincidence.

Dad was much sicker at the hospital than he ever was at home; maybe because he got a different batch of heparin (from the VA hospital) when he got home. I really think Dad received tainted heparin; I saw him at hospital on a daily basis and just looking at him, I thought, 'this isn't my dad'. Now he is just getting back to normal and thank God he is alive. I have to say the nurses at the hospital were awesome but when I questioned his medication, none of them would talk about it.

Just think--all this illness from a nail in his foot."