Heparin Failed to do the Job

For almost a decade, Allan has been living with a mechanical aortic valve and after heart surgery was told he would be on the blood thinner warfarin for the rest of his life. But last year he needed another surgery and had to switch to heparin; Allan self-administered heparin injections for 13 days. He later discovered that switching meds could have been a fatal mistake. 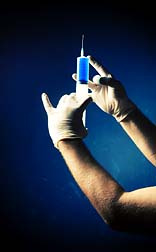 "In September 2007 I needed dental surgery," says Allan. "I have a history of two TIAs (transient ischemic attacks, like a mini stroke) but they were small and insignificant. However, even though my cardiologist and GP were concerned that going off warfarin would pose a risk, the dental surgeon made a decision that two dental implants had to be removed and I had to temporarily stop taking warfarin.

In Oct 2007 I stopped the medication and for 13 days, substituted it with heparin syringes. Everything seemed to be OK until 6 months later. I got into a rear-end collision--nothing severe—but I didn't feel that great. I took a few days of work and rested but I had a severe attack; I don't know what happened but I ended up going to ER by ambulance and the symptoms were like a TIA except this time I had absolute loss of equilibrium, I was shaking and trembling and sweating profusely. But my main problem was arrhythmia.

I had never experienced those symptoms before—I was only 61 and in very good shape: I'm not overweight, don't smoke or drink. This attack came out of the blue.

Back in the hospital, the physicians were very concerned. This 'attack' apparently had no connection with any medications. I explained to the doctors that I had two smaller TIAs in the past but they were so insignificant they lasted seconds and I wasn't debilitated in any way. They ordered a series of tests: a brain scan, MRI and a litany of heart tests including a stress test and EKG. My heart kept fluttering and I was very nauseated. I basically felt terrible.

As it turns out, going off warfarin was very dangerous: my INR (international blood clotting factor) shot up to 5.9 and that is lethal for me: it needs to be between 2-3. I get an INR test every few weeks so it keeps within a certain rage. A normal person is around 1 but mine has to be higher so it doesn't clot and cause a stroke.

Heparin took the place of warfarin or coumadin, but I believe that heparin failed to do its job. So what is the correlation between me having arrhythmia and going on heparin? This drug was recalled in February of 2008 but contaminated heparin could have been in the market for months prior to the recall.

More HEPARIN News
I am going to find out from my doctor if there is any medical history regarding the time frame from my taking Heparin to having these symptoms. From what I understand, the clotting factor can be over a period of 6 to 12 months. And another thing: I am very diligent with my food intake and INR testing. For instance, vitamin K is very bad for my INR so I have to stay away from certain foods, which means that there is no way it can be blamed on my own maintenance—I really look after myself.

I suggested to my family physician that heparin may have been the cause. He advised that I pursue any investigation of heparin. I'm a private investigator by profession so I didn't hesitate. I haven't spoken to my cardiologist about heparin yet but a doctor nearby does seminars on interactions between warfarin and other drugs so I will discuss this issue with him as well.

All of a sudden I end up with this huge problem after 13 days of heparin injections: there may or may not be an action but if you don't pursue something, you don't get it."