A helicopter crash, in Quebec, Canada, early Wednesday morning has killed a CTV news cameraman and the pilot. 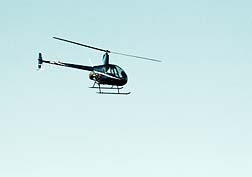 The crash, which occurred about 240 kilometers from Montreal, happened at around 10:00 a.m. eastern time. The helicopter reportedly swooped down out of the air, hitting a hydro pole then dropping to the ground. One body was reportedly flung to the nearby roadway, on impact, but there was no time to try and get anyone out before the chopper burst into flames.

An eye witness, André Marcoux, who lives in the area and was parking his car in his driveway at the time, said he heard strange sounds coming from the helicopter, and believes the helicopter's engine failed.

Hugh Haugland, the 44-year old cameraman on board, was gathering footage of damage from a tornado that struck in Mont Laurier, PQ on Tuesday. Haugland, the son of CTV Montreal anchor Bill Haugland, was a veteran cameraman and had been with CTV for 24 years.

The pilot, Roger Belanger, reportedly had more than 10,000 flying hours.