In what is becoming a troubling reality, yet another helicopter has crashed—this time taking 8 lives. The helicopter crash happened yesterday afternoon when a helicopter owned by PHI Inc of Lafayette crashed shortly after takeoff and perished in the Louisiana marshlands near the PHI base in Amelia. 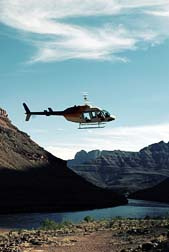 It is still far too early to even begin to assess the cause. The National Transportation Safety Board (NTSB) is on the trail of the helicopter crash, but at present it is not even known what type of helicopter was involved.

What is known is that a helicopter either owned, or flown by PHI lifted off yesterday afternoon with 2 pilots and 7 passengers—for a total of 9 occupants—en route to an oil rig off the New Orleans coast. Flying oil rig personnel between oil rigs at sea and the mainland via helicopter remains a popular mode of transportation, and the flight on the surface would be assumed fairly routine.

However, something went terribly wrong. What that 'something' is, has yet to be determined.

It should be noted that PHI is not only the primary provider of helicopter service to oil and gas platforms in the Louisiana area, the Lafayette-based company also undertakes medical flights.

This past June a PHI Air Medical helicopter en route from Huntsville to Houston crashed in Texas, killing 4: the pilot, paramedic, nurse and patient.

A rash of helicopter crashes, and especially medical air transport crashes involving helicopters, have elevated concern with regard to why these crashes are happening.
However, according to a report carried in the New York Times this morning, the crew of the ill-fated PHI medical helicopter in June had agreed to transport the patient after another company refused the flight, citing less-than-favorable atmospheric conditions at the time. The latter had indicated that the cloud cover was too low, reducing visibility in the early morning darkness that presented at the time of flight.

One could make the case that when a patient, acutely in need of hospital care requires immediate, and often life-saving transpiration, a cavalier pilot may risk less-then-ideal conditions in order to attempt to save the life of the patient.

However the helicopter crash which occurred yesterday in the Bayou Penchant marshlands of Louisiana would have had no medical emergencies tied to it. At least, there have been none reported so far. Thus, until the investigation is completed it cannot be determined if weather played a factor, or if the helicopter was overloaded or mechanically unfit.

The lone survivor, who could provide clues to the horrific helicopter crash, is in critical condition in hospital. Investigators have not released the names of the dead, therefore it is unknown if the survivor was one of the passengers, or a pilot.

It has been reported that the US Coast Guard assisted sheriff's deputies with Terrebonne Parish with the grim task of recovering the bodies. Meanwhile the survivor was transported to an Ochsner Medical facility in suburban New Orleans.

More HELICOPTER CRASH News
There have been a rash of helicopter crashes over the past few years, many of them medical transport craft. It has not been determined if any one factor is responsible. However, medical air transport via helicopter has become increasingly popular given the increased speed possible in delivering a critical patient to hospital over land ambulance. That said, some jurisdictions have questioned the need for airlifts for patients who are not all that critical, and for whom land transport would be appropriate. And yet the push to get accident victims to hospital faster has resulted in an increase in air ambulance flights.

As for the Louisiana helicopter crash of yesterday, time will tell just what it was that felled a helicopter on a routine flight. Eight lives were lost. The families of those who died, as well as a survivor whose life may never be the same again, will be watching the outcome of this investigation with great interest.