A helicopter crashed into power lines in California's Central Valley five days into the New Year, taking the lives of the pilot and the three passengers aboard. 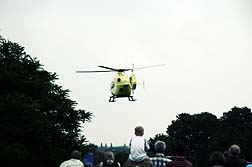 The accident occurred in eastern Madera County, California. According to the January 15 edition of the Fresno Bee, two federal law enforcement agents near the confluence of Willow Creek and the San Joaquin River witnessed the devastating helicopter accident just after noon on January 5. The agents told investigators that they saw the helicopter emerge from a valley to the north and fly south along Willow Creek in their direction.

More HELICOPTER CRASH News
The valley is spanned by a maze of power transmission lines. Eyewitnesses reported that pilot "reared back" when he realized he was flying directly toward the power lines, but it was too late: the helicopter severed one static ground line and became entangled with three parallel power transmission lines. Abrasion marks on the stricken helicopter's main rotor blades were found to be consistent in appearance with the severed static line.

Weather conditions were reported to be clear and eyewitnesses reported that the helicopter did not appear to be malfunctioning at the time of the accident.

Investigators released a preliminary report on January 15, ten days after the helicopter accident. It is not known if the collision between the primary rotor blade and the static line—if that, indeed, is proven to be the case—had any bearing on the helicopter crash.