More HELICOPTER CRASH News
A mid-air helicopter crash, in which a sightseeing chopper collided with a low-flying plane over the Hudson River in August of 2008, is the subject of a recent lawsuit brought forward by the families of the crash victims. 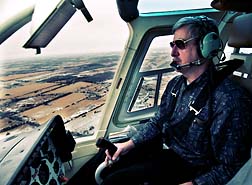 Five Italian tourists were aboard a Eurocopter tour of New York City operated by local aviation firm Liberty Helicopters, when the vehicle struck a Piper fixed-wing airplane, killing all nine people aboard the two aircraft.

The suit, filed by the families of the tourists in the U.S. District Court in Newark, seeks damages from the flight providers of both aircraft as well as the estate of Steve Altman, the pilot of the Piper plane involved in the crash.

This is the second case from the incident to go before a judge, as the NY1 news reports that Altman's widow also filed suit against the flight providers this past October.

New York state officials recently changed the flight path restrictions over the Hudson in an attempt to make the pathway safer.