More HELICOPTER CRASH News
A recent helicopter crash near the border between Nevada and California has claimed the life of the vehicle's three crew members. 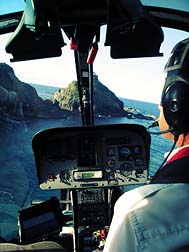 According to the Associated Press, the aircraft experienced undetermined difficulties during its return flight to Susanville, California, shortly after dropping off a patient at a Reno area hospital. The pilot managed to issue a mayday distress call before the helicopter struck the ground, killing the pilot, flight nurse and Paramedic that were on board the doomed vehicle.

The Federal Aviation Administration (FAA) and the National Transportation Safety Board are still studying the wreckage of the crash site in an attempt to discover the cause of the accident.

This is the second fatal helicopter crash for Susanville-based Mountain Lifelight, the company that owns the vehicle. The company had previously lost a copter traveling the same route in 2002.

The Helicopter Association International reported in 2008 that 186 helicopter accidents occur on average each year, the majority of crashes resulting from personal flights. Air medical services accounted for 11.3 percent of all crashes in the US over the past 10 years.