More HELICOPTER CRASH News
A recent helicopter crash in Idaho claimed the lives of two biologists and the craft's pilot. 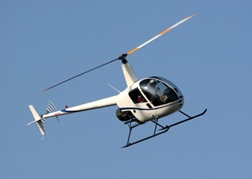 The two biologists, Larry Barrett, 47, and Dani Schiff, 34, were both from Lewiston, Idaho and worked for Idaho Fish and Game, according to the Los Angeles Times. The pilot was Perry Krinitt, 43, of Belgrade, Montana, reports the Spokesman-Review.

The group was out on a salmon spawning nest counting mission when the crash occurred. The helicopter came down near the US Forest Service building in Kamiah, in the northern part of Idaho.

Local resident Jim Emmert said he witnessed the crash from his house.

"I saw white parts coming off of it," Emmert told the Associated Press. "It made a crumpled sound — like paper being crumpled — and then a loud crash and an explosion. And then nothing."

The last fatal aircraft accident for Idaho Fish and Game occurred when a helicopter crashed in December 2000, also in northern Idaho, reports the Times.