A Florida man was killed in a helicopter crash when his experimental aircraft went down behind a supermarket. 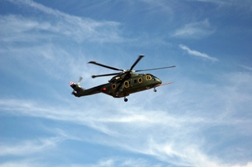 Edgar Thompson took off from Dunn Airpark and flew for about a half mile in the aircraft before crashing behind a Publix Supermarket in Titusville, Florida, according to WOFL, a Fox News affiliate.

More HELICOPTER CRASH News
Thompson's wife told the news source that her husband had been an engineer at Lockheed Martin for 30 years and had been building the experimental helicopter in the couple's garage over the course of the past three years. Thompson, who was 66 years old, had uploaded videos and images of his previous flights onto the internet.

William Raulerson, a fellow aviator, said that he knew Thompson for years, and when he saw the police at the airfield he realized something was amiss.

"The police and I walked down to Eddy's hanger where he had his helicopter and his car was there we looked in the hanger and the helicopter was gone," he told the news provider.

Both Raulerson and Thompson's wife said that the experimental aircraft had mechanical problems in the past but that there hadn't been any issues recently.