Report: Pilot in Fatal Helicopter Crash Was Trying to Beat a Storm

More HELICOPTER CRASH News
Government officials investigating a recent helicopter crash that killed a local pilot and two on-board nurses on March 25 have determined that the man was likely trying to stay ahead of an approaching thunderstorm. 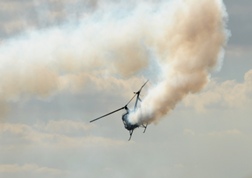 The Associated Press reports that the ill-fated medical helicopter had just dropped off a patient at the Jackson-Madison County General Hospital and was returning to its home field at Parsons when it suddenly lost radio contact. The pilot had not indicated any problems with the chopper, according to official reports.

The National Transportation Safety Board (NTSB) has yet to rule on the exact cause of the crash in Monday's preliminary report, but suggests that weather may have been the culprit. The report notes that a second helicopter company had avoided flying at that time due to weather conditions.

NTSB also reports that the pilot had indicated to an air traffic controller working with Hospital Wing, the company operating the helicopter, that he intended to touch down before the storm hit.

Workers at a nearby factory reported seeing a flash of lightening followed by an orange glow in a field just outside of Brownsville.