Helicopter and Small Plane Collide in Mid-Air in Lower Manhattan

Yet another air disaster has unfolded over the Hudson River in Lower Manhattan after a tourist helicopter and a small plane collided in mid-air around noon today. The plane crash rained debris into the water below. 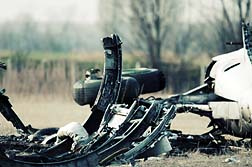 CNN is reporting that the helicopter belonged to Liberty Helicopter Sightseeing Tours and is believed to have had six people aboard. Reports of survivors or victims are premature. However rescue divers and Coast Guard officials are reported to be searching the water between New York City and Hoboken, New Jersey.

A report in the New York Times this afternoon made reference to one individual having been removed from the water, and it was just confirmed by CNN moments ago that one survivor has been pulled from the water alive. There was no indication as to the condition of the individual.

More Helicopter Crash News
The small plane is reported to have taken off from Teterboro Airport in Teaneck, New Jersey this morning after briefly landing to pick up one passenger. According to a spokesperson for the New York Port Authority the plane took off again at 11:54 am eastern time.

Paul Browne, a spokesperson for the city police department, indicated in the New York Times report that "(the crash) was in the vicinity of West 14th Street."

A spokesperson with the Federal Aviation Administration (FAA), Arlene Salac, told CNN that the tour company had confirmed the downed helicopter was one of its own.

The chopper is believed to have had six people on board. There was no indication as to how many might have been riding in the small plane, or what kind of plane it might have been that was involved in the mid-air collision.